Legal & General Investment Management promotes the benefits of diversity with companies we work with.

How we make a difference 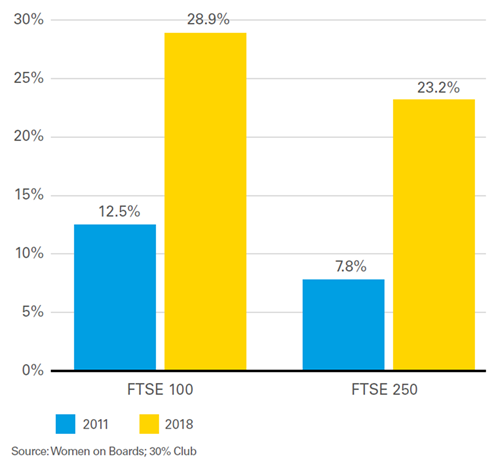 We have never believed in establishing quotas as this can result in companies performing a box ticking exercise. Instead, we have been advocating for companies to set targets for gender diversity that are right for them at board level and below. Companies should not consider diversity an ‘add-on’ but as part of their core business strategy and culture that can improve business performance. As many companies tell us, their employees are their most important asset.

But just talking about diversity is insufficient. As shareholders, we are able to make our views and priorities known through our voting practices at companies’ shareholder meetings. Since 2015 we have been voting against board chairs of FTSE 100 companies, the largest companies in the UK, that have still failed to appoint at least one woman to their board. In 2016, we escalated our policy to incorporate the smaller FTSE 250 index companies and have seen real progress.

For 2018, we shall be voting against all FTSE 350 companies (those companies in the FTSE 100 and the FTSE 250 indices) that have less than 25% female representation at board level. This was the target set by the Davies Report for the largest 100 companies to achieve by the end of 2015. Some companies have achieved this, but many still have not. We’re leveraging our scale in the market as ‘active owners’ to encourage them to do better but also to be clear that this target will be raised.

The Hampton-Alexander Review is the latest government report on the issue, setting a new target for companies of 33% of women on boards for all 350 companies by the end of 2020, which we also support. Research suggests that once representation of a minority group goes beyond 30% (the ‘critical mass’), this marks an inflection point where these voices are genuinely heard in an organisation rather than what might be regarded as ‘box-tick’ representation.*

We have publicly set our 25% threshold for this year and our 30% threshold by the end of 2020 to encourage and help companies to meet the slightly more ambitious 33% Hampton-Alexander target. We are hoping that this incremental escalation of our voting policy will help companies to understand our expectations and also keep up pressure on improvements for them to get to the 30% critical mass.

Our voting activity on diversity more than tripled in 2016 after our inaugural year of voting on this issue in 2015. The companies in which we invest took notice of our actions — even more so when our voting activity more than doubled in 2017 from 2016 levels. Engagement with companies and key stakeholders on this topic has also been a fundamental part of our activity and influence. It was one of the top three topics we discussed with companies in 2017.

Legal & General meets with those companies that we believe need to improve their gender diversity. During these meetings , which may be private or in collaboration with other investors, we not only talk about board level gender diversity, but also the initiatives the company may have in place in order to promote women throughout the workforce and at executive and management levels. We also encourage companies to establish stronger and more meaningful policies on diversity and to ensure that these are properly disclosed.

In addition to engagement and voting, we have been vocal publicly on our commitment to this important issue, supporting various initiatives which continually promote gender diversity at UK companies. Legal & General has been an active and contributing supporter of both the Davies Report and the subsequent Hampton-Alexander Review. We promote the report and explain to companies how we use the data it collates and have contributed case studies to illustrate from an investor perspective the importance of this issue.

We have also worked with global head-hunters and asked them to widen their recruitment net to individuals who hold high leadership positions but may not have previous board experience to be considered in the pool of candidates for non-executive director positions. In 2015, we contributed an essay to the UK Board Index Report, released by the head-hunter Spencer Stuart. Legal & General Group has long been a supporter of the 30% Club with both our CEO and our Chair signed up to this important initiative. Legal & General was also an early member of the 30% Club Investor Group and in 2017 were made Co-Chair of the Group which brings together investors to engage with companies on the challenges they face with increasing female representation throughout the business.

Legal & General also signed the Women in Finance Charter which was launched in 2016. This initiative brings together the government and signatory firms to work together to build a more diverse industry. Over 160 signatory firms pledge to be the best in the industry in terms of gender diversity across all levels of their business. The recent addition of Deloitte, Tesco Bank and the Bank of England has increased the number of employees covered by the Charter to over 600,000. Finally, Legal & General has published an aspirational target of 50/50 by 2020 – to achieve gender parity in its leadership roles by the end of 2020.

Read more about the business case for gender diversity.

Reach your financial goals with our range of savings products.

Sexism in the city

Today is the deadline for the first mandatory reporting of UK companies’ gender pay gap data.

Gender inequality is one of the biggest issues of our time – and one that generates so much frustration.

Seven tips to help with saving for the future

Want to start setting some money aside each month? We’ve got some ideas to help get you started.

Please remember the value of your investment and any income from it may fall as well as rise and is not guaranteed. You may get back less than you invest . Tax rules for ISAs may change in the future and their tax advantages depend on your individual circumstances.

Please note the information, data and any references in this article were accurate at the time of writing. Please check the date of the content if you’re looking for up to date investment commentary or tax-year related information.