As a grandparent today, your role within the family structure is likely to be quite different from that of a grandparent, even two or three generations ago. Close-knit family structures have often been replaced by more fluid arrangements with stepfamilies, and traditional roles are changing.

The passing on of knowledge, however, has been and always will be a multi-generational activity. Wisdom is both learned and inherited, and grandparents can play a huge part in supporting and educating their grandchildren.

Many of us will remember a grandparent pressing a pound coin into our little fist as a child, with a wink and a whisper, “Don’t tell mum/dad!” But grandparental advice about money can go much further than this. Many grandparents take care of children in the form of familial childcare, or support their own single-parent kids, as more women return to work. As grandparents spend more time with their grandchildren, it’s not unexpected to find them sharing valuable life skills, such as money management.

How do children learn the value of money?

How kids understand money, changes as they grow. At a young age, up to about nine years old, they have a general grasp of the concept of money, inasmuch as they know there is an exchange that takes place. Research has shown that only 40% of children learn anything about finances and budgeting at school, so the more you can normalise talking about money management, the better.

The same research also shows that, unsurprisingly, children who earn regular pocket money in return for chores, and who are given responsibility for their own earnings, tend to manage their finances better as adults.

By the time they hit ten years and upwards, children can really start to understand the benefits of managing their own money. Grandparents can help here, by demonstrating simple budgeting plans, and talking about how to raise funds for specific items. Or even just by ensuring that the child sets aside enough money on, say, a weekly basis, for the things they want.

Surely this is a parent’s job?

Yes, of course it can be. But that doesn’t mean it can’t be a grandparent’s job too. In fact, as children grow older, heading into their teenage years, many of them will rebel, and reject listening to their parents. It’s hard to talk about budgeting when there’s a lot of door-slamming and sulking going on!

But grandparents can often navigate this choppy time more successfully. Their relationship with their grandchildren is different, and there’s a good chance they might have more success getting through.

Janey is a grandmother who has spent a lot of time teaching her granddaughter Liz about money over the years. The simple lessons she shared, have helped Liz as she now prepares for university.

“When my daughter Sandy got married and had a baby I was delighted, but the marriage didn’t last, and I ended up looking after Liz a lot to help out. I didn’t mind, quite the opposite really – at the time we had a small jewellers and we lived in the flat above it. So Liz would come to us during the day when Sandy was at work.

“Liz loved to be in the shop. She would stare at the sparkly things like a magpie! Diamonds were always her favourite – and she doesn’t know this, but I have left her a gorgeous little collection in my will.

“I think she was fascinated from an early age about money and diamonds and things. I spent time with her, explaining that the diamonds were beautiful but expensive. She asked about money, and we talked about how things needed paying for. She learnt about the value of things. She tried to buy a diamond necklace off me with some money in her piggy bank once. I told her she’d need a few more pounds! But she understood. I think she was about five or six then.”

Janey says that as Liz grew older, she began to understand how things worked a bit more clearly.

“When she was older – perhaps around eight or nine – she started to really think about money. She had pocket money from her mum for tidying her bedroom, and she did this amazing thing one day. She was so serious – my heart melts thinking about it even now – she told me she had been saving her money and she was going to take me out for lunch! It was to repay me for all the times she had her lunch at mine.

“Of course I said yes, how delightful. She took me to a fast food restaurant and bought me a burger. It was obviously really important for her, so I let her order herself, and pay, and I thanked her for it afterwards."

"And in that moment I realised she’d understood how it works. She earned her pocket money. She saved it. And then she bought me lunch. I don’t mind telling you, I shed a little tear. What a sweetheart.”

A good starting point to learn more about budgeting

“After that, I asked her if she wanted me to show her how to really save and plan her money, and she was keen. So I seized the moment. She was such a serious kid, but she had her head screwed on. She told me that it was important to buy sweets on Saturday after she’d tidied her bedroom, but there were other things she wanted, and she didn’t know how she was going to get the money for them.

“So we talked a bit about earning money, and looked at ways she could make a few extra quid. I said I’d pay her £5 a week to wash the car on Sunday mornings, and that that would be a way to start thinking about money. She had specific things she wanted to buy, like a pair of trainers, but she couldn’t see how to get them herself, until she understood that she could find other ways of earning a few bob. So once she realised that washing cars could work for her, she went round her estate and offered to wash loads of cars, and in one single day she raised nearly £50! Enough to buy whatever it was she wanted, and have some left over.”

Lessons learned this early on can be invaluable. That’s not to say that children won’t still make mistakes and overspend, or forget about costs. Budgeting and planning take experience, which is why we have partnered with the Girlguiding association, to help support its important Savers badge.

Janey treasures the time she has had with her granddaughter, and hopes that her input will help Liz plan for her future.

“My granddaughter Liz is a bit older now; she’s off to university soon, and I know she’s worried about her student loan and not having enough money for rent and so on,” she says. “But I think she’s going into the situation a bit better prepared to manage her money than maybe some others, because of the time we have spent together learning about money when she was growing up.”

How to give advice to grandchildren about saving money

If you’d like to support your grandchild, there are a few things to keep in mind:

The Bank of Mum and Dad (BoMaD)

The Bank of Mum and Dad is a way in which children are financially supported by their parents, or helped to get on the property ladder. 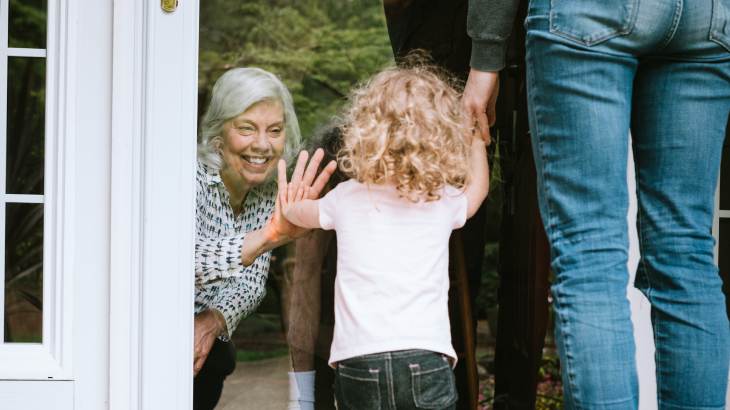 How to stay close to your grandchildren when you’re apart

Living far away from each other, are just two reasons why you might be separated from your grandchildren. It’s not always easy, but there are ways of coping, as these grandparents all discovered…

The Bank of Grandma and Grandpa

As a grandparent, how would you feel if you knew your grandchildren were struggling financially?