When we’re young, our age defines us. We can vote and drink at 18, rent a car at 21, and earn the highest minimum wage at 25. After that, our attention turns to ‘landmark birthdays’ and what they say about us, whether it’s settling down at 30, life beginning at 40, 50 being the new 40, or getting a bus pass when we turn 60.

But not every 30-year-old wants to get married and not every 60-year-old feels ready for free travel. In fact, there’s growing evidence that we’re actually only as old as we feel. And the age we feel – called our subjective age – reflects and affects our physical health, mental wellbeing, attitude to work, and even how long we live.

To explore what makes us feel younger and older than our chronological age, we surveyed over 1,000 people aged 30 to 86. 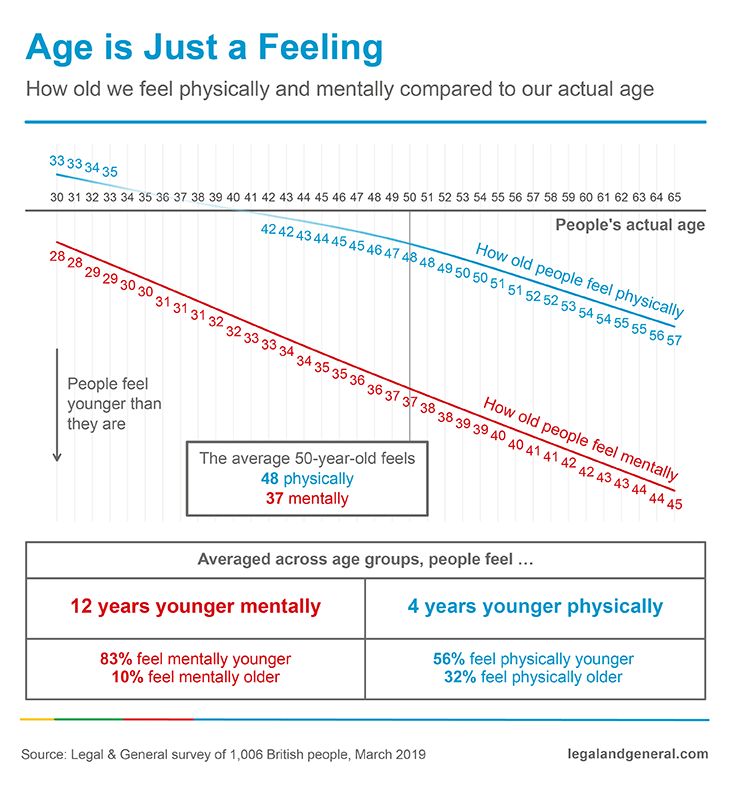 It could be said that we each have three ages. There’s our chronological age (the number of times the Earth has orbited the sun since the day we were born), our mental age (how old our personalities and mindsets make us feel relative to others) and our physical age (how old the condition of our bodies makes us feel).

When we asked over 1,000 people for these three ages, only 2.5% said their chronological, mental and physical ages were all the same.

Eight in 10 said they feel mentally younger than their actual age and 56% feel physically younger.

The average difference between our actual age and how old we mentally feel is 12 years, but the gap changes across our lifetime. A 30-year-old typically feels two years younger mentally, while a 40-year-old feels eight years more youthful in their mind than what’s written on their birth certificate. By 50, the gap has widened to 13 years, while a 60-year-old typically thinks their mental age is 42.

The gap isn’t as wide when we’re asked to say how old we feel based on our bodies. People typically said their physical age was four years younger than their actual age, but one in three people said their bodies made them feel older than they really are.

As we age, we’re more likely to face reminders of how old we really are. To reveal the things that bump up our ‘physical ages’, we showed people a blank body outline and asked them to click on the specific area that most often makes them feel their age – or older. 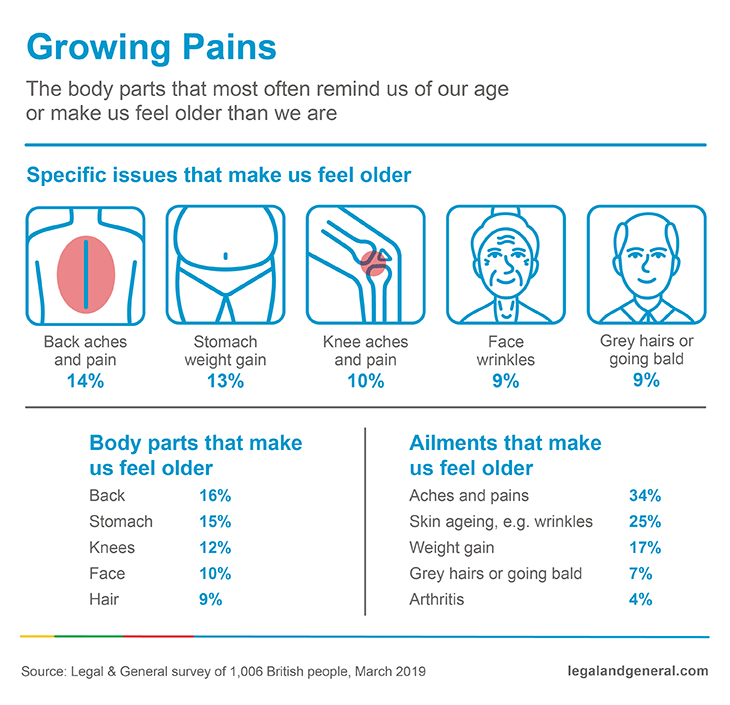 An analysis of 19 separate studies that included almost 140,000 adults found that around 43% of people in the UK experience chronic pain (pain that lasts for over three months). Aside from the negative physical sensations, on-going pain affects our mental health and, based on our results, our perception of our age. On average, people who said they had no body-related complaints gave a physical age that was eight years younger than those with aches, pains or insecurities. Put another way, on average, those without body complaints said they felt 10.3 years younger than their actual age, whereas people with issues felt only 2.3 years younger.

The back was the body part that most often reminded people of their age (16%), followed by the appearance of their stomach (15%), the condition of their knees (12%), and signs of ageing in the face, such as sagging and wrinkles (10%).

According to the study mentioned above, 14.3% of people aged 18 to 25 have chronic pain. In our survey, 91% of people under the age of 35 pointed to a part of the body that makes them feel their age or older, which suggests that ailments don’t need to be serious to add a few candles to the birthday cake in our minds; they just need to be noticeable enough to remind us that our bodies are changing.

The death of our peers can be a stark reminder of our own age, and the reminders get more frequent the older we get. On average, a 50-year-old man has a 1 in 294 chance of dying in the next year, rising to 1 in 126 by age 60, and 1 in 53 by age 70. With a ‘back catalogue’ of acquaintances stretching back to our school days, there’s always a chance we’ll be reminded of our mortality by the passing of someone who was born at the same time as us.

In contrast, the two types of thoughts that reinvigorate us and make us feel younger than our actual ages are keeping fit (42%) and romance (36%).

Both fitness and romance produce a cocktail of feel-good brain chemicals, which could explain why they made two in five and one in three people respectively feel younger than they really are.

Certain thoughts can add or subtract a few years from our subjective ages depending on whether we perceive them positively or negatively. For example, 31% of people said thinking about work made them feel older, while 18% said the opposite.

Across all age groups, grandchildren made more people feel older than younger, but those aged 60 and older felt differently. Twenty-four percent of those aged 60+ felt older when thinking about grandchildren, while 27% felt younger. Over one-third of people in their 50s felt older, and 12% felt younger, when grandchildren came to mind. It seems our subjective age is influenced not only by what we experience, but also by what stage we are in life when the experience comes around. 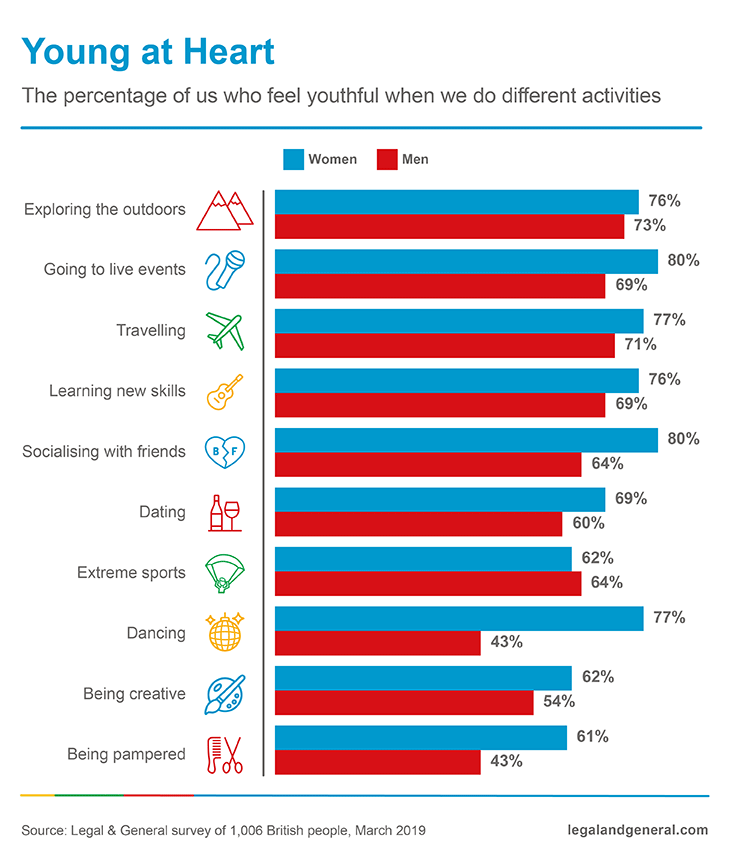 We didn’t choose when we were born, which means our biological clock runs at a speed we can’t control. But choosing how we spend our time can slow our subjective age. We asked people who had tried a range of activities, from socialising with friends to adrenaline-pumping experiences like sky-diving, whether the activities made them feel more youthful.

Attending live events was most likely to make people feel younger (75%), followed by exploring the great outdoors (74%). These types of activities could help offset the inevitable fact that most of us are bound to fall behind on current trends – half of the people we spoke to said current chart music makes them feel old.

Learning new skills proved a popular antidote to feeling older, with 70% of people in their 40s saying it makes them feel younger, compared to 79% of people aged 60 and older. This trend isn’t apparent for most of the other activities, including attending live events, travelling, or dancing, which have about the same effect on subjective age across age groups. This suggests there’s something particularly rejuvenating about developing new talents as you age.

Women seem to feel the age-defying effects of a fun-filled calendar more than men, as for nine out of 10 activities we asked about, a higher proportion said the activities made them feel younger. The only exception was extreme sports, which was marginally higher for men (64% vs. 62%).

Dancing divided opinion between the sexes. Eight in 10 women felt busting a move on the dance floor lowered their subjective age, compared to four in 10 men. Perhaps it’s because men are less willing to give it a go. A survey by YouGov showed that 29% of men have to be ‘dragged onto the dance floor’ compared to 19% of women, and three-quarters of British men have never or rarely danced.

To dance like no one’s watching requires confidence, which is a personal commodity that can rise or fall with age. We found out which insecurities are most likely to lessen as we mature. 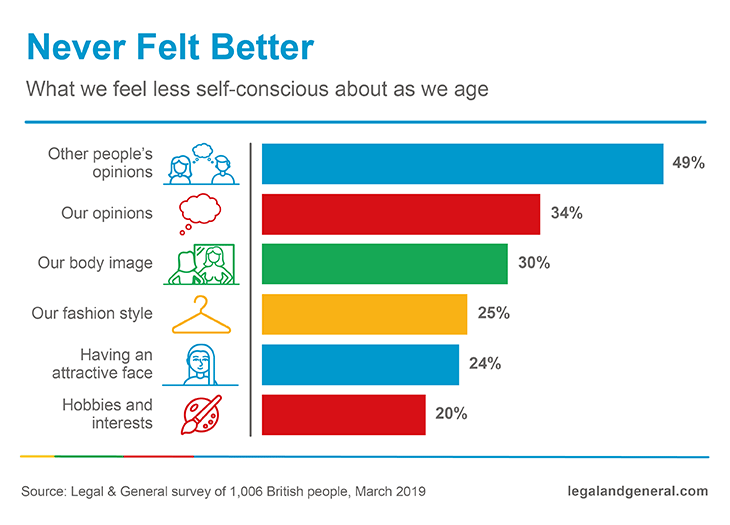 We asked our survey takers what aspects of their lives they felt self-conscious about when they were younger but have since grown to feel more comfortable with. Almost half said they’ve become less self-conscious about what other people think about them as they’ve aged. One in three said they’ve become more comfortable with their own thoughts and opinions, and 30% have learned to love, or at least live with, their body appearance.

How we perceive ourselves and think others perceive us can make a big difference to how old we feel. In one study, people aged 52 to 91 were asked to test their grip strength. Those who were praised by the test takers as having a strong grip compared to peers of the same age not only reported a lower subjective age as a result, they also performed better in a subsequent strength test. As their self-confidence grew, their subjective ages fell.

Most of us can’t use the approval of a scientist to give our egos a boost, but there’s always the rich and famous to take some inspiration from. We asked our survey participants which celebrity they think is a prime example that ‘age is just a number’. 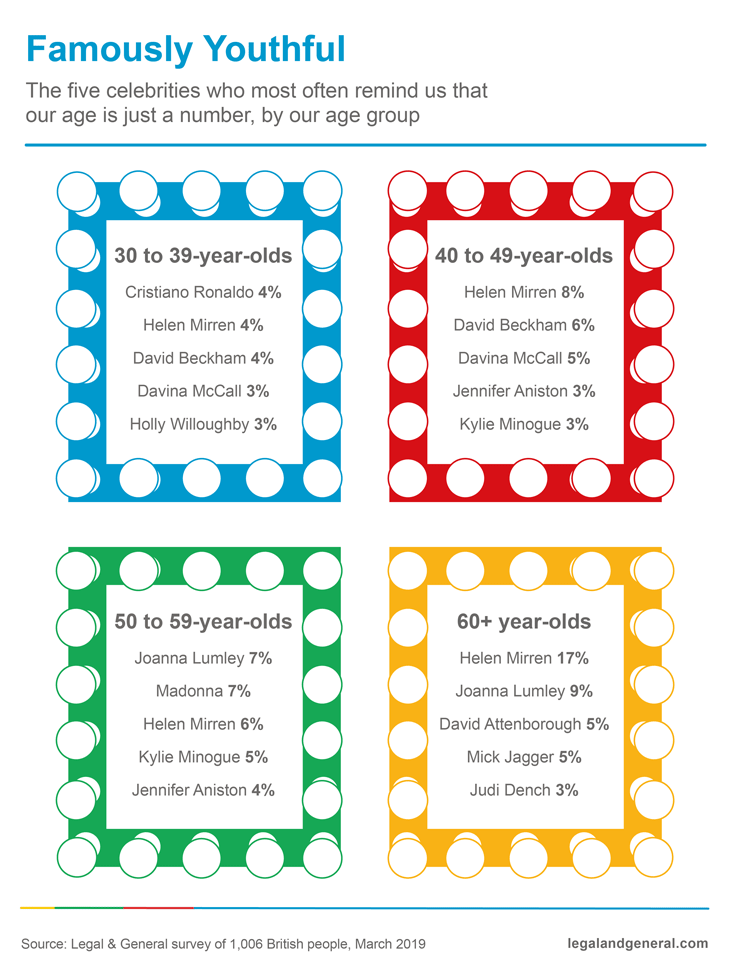 The celebrities most often said to epitomise the phrase ‘age is just a number’ differed depending on the ages of those we asked. When given the choice to say any celebrity that comes to mind, almost 1 in 10 people in their 50s said either Kylie Minogue or Jennifer Aniston remind them that ‘age is just a number’ – two women you may be surprised to hear are in their 50s themselves. Another 7% in their 50s chose Madonna, who believe it or not has now reached her 60s. Joanna Lumley was most chosen by 50-59 year-olds and second-most chosen by those aged 60 and over.

One name appears in the top five lists for men and women, spanning all age groups: Helen Mirren. At 73, her age-defying looks continue to inspire people of all ages. In response to a recent makeup-free selfie, one fan said ‘It's not about perfection, but about embracing who you are and accept[ing] that true beauty comes from personality not makeup.’

Only one in 40 of us feels that our mental and physical ages match our chronological age. Most of us feel much younger, and the older we are, the bigger the gap becomes between our real age and our ‘felt age’.

We’ve seen that we don’t pluck our subjective ages out of thin air. A persistent ache or pain, or feeling self-conscious about your weight or some extra wrinkles, can add eight years to how old you feel. On the other hand, focusing your attention on the brighter side of life can keep a spring in your step – staying fit and going on dates are top ways to feel younger than your years.

We surveyed 1,006 British people aged 30 to 86 in March 2019. We asked them when they were born, as well as how old they feel mentally and physically. Other questions were asked to gauge which activities and thoughts affect their perception of age.

Feel free to share our findings with your friends for non-commercial purposes. All we ask is that you link back to this page to give our research team credit.