Lessons on life and loss

Coping with grief is tough as an adult, but children can have an even harder time coming to terms with loss if they can’t first understand what’s happened. They might feel confused, blame themselves or have no idea how they’re ‘supposed’ to feel. But grieving, whether it’s for a pet or a person, can also be a valuable life lesson for kids as long as they have the support needed to battle through the heartbreak.

To discover how children grieve the loss of loved ones, we surveyed 1,000 parents of 3-16 year-olds to see how they understand, experience and come to terms with the inevitable. 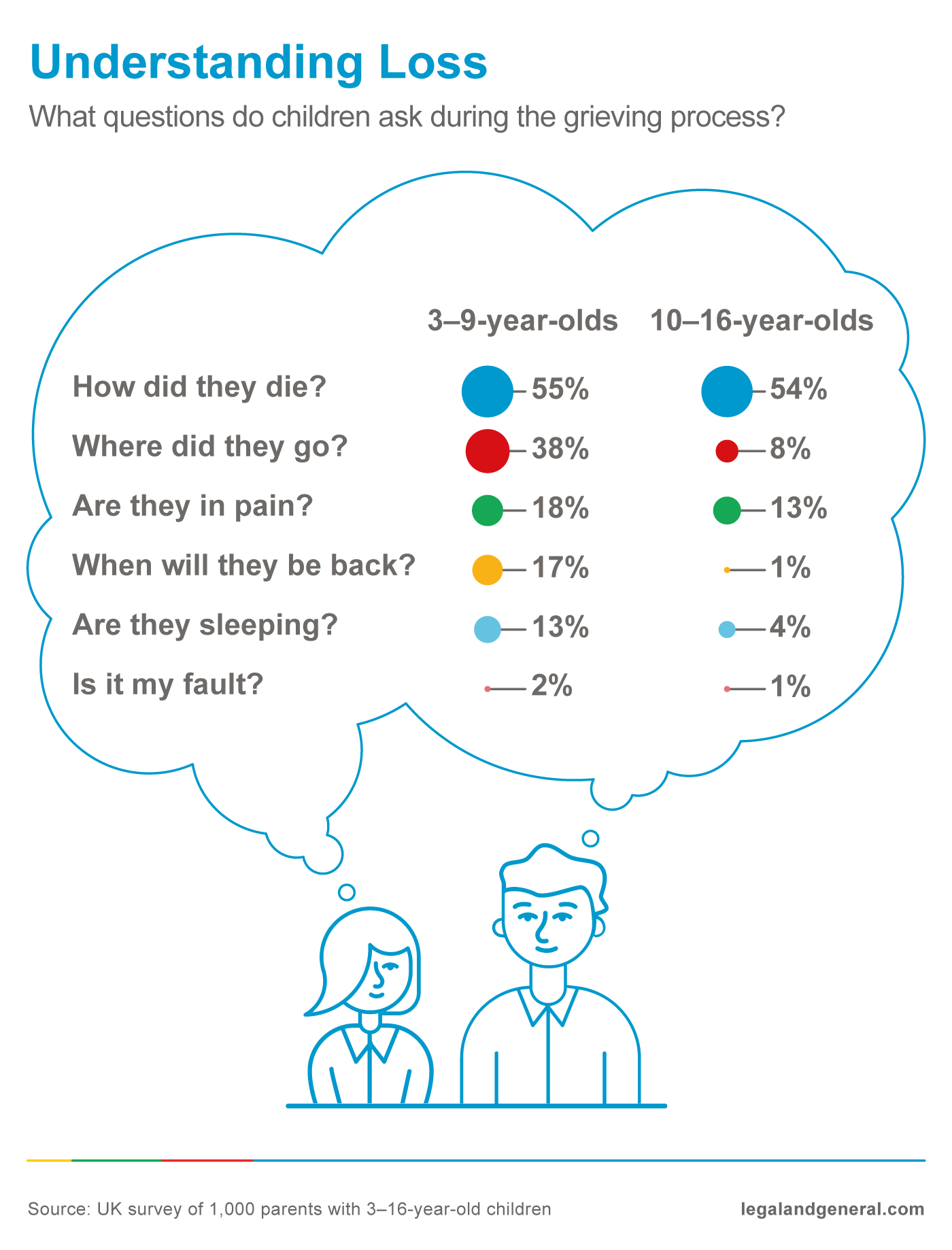 The majority (54%) of children experience the death of a family member by the age of 16. But a 16-year-old has a different understanding of death than a 3- or even a 9-year-old, and there’s a good chance this changes how they cope with grief.

Studies suggest that under-5s are very unlikely to understand that death is permanent. Before the age of nine, they might not realise that death affects everyone, including them and their family.

Despite children’s inquisitive nature, it’s not easy for parents to talk about loss with their kids. Of the parents whose child had lost a family member, 10% lied to their child to soften the blow, despite the fact that experts say honesty is the best policy.

Parents think children are ready to discuss death at six 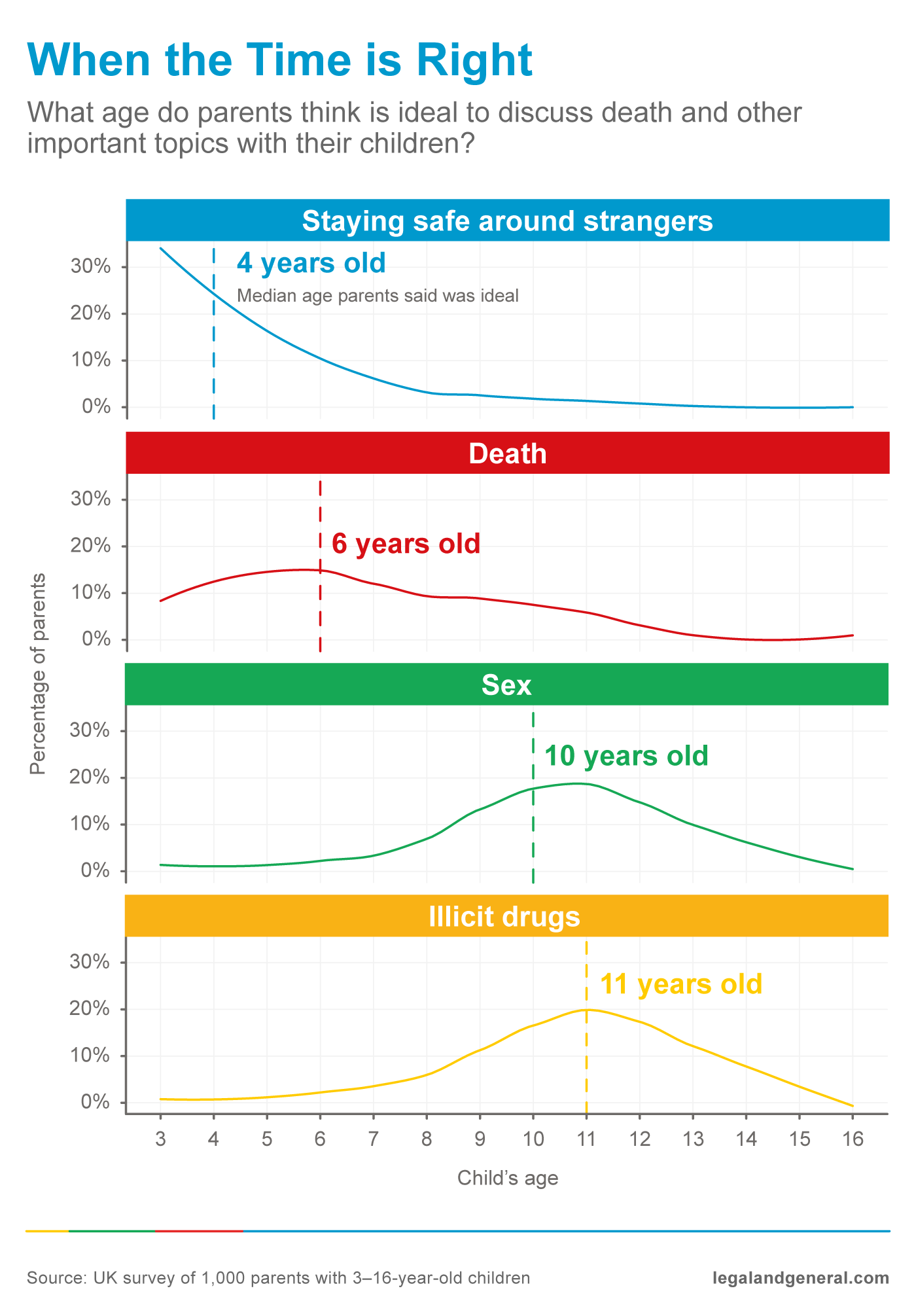 Because it’s so hard to broach the subject of grief, many parents understandably cross that bridge when they come to it. However, some parents think a pre-emptive discussion about death is the best approach, and these parents typically think the ideal age to start is at six years old. Even this might be too late though, as 1 in 5 (22%) kids have lost a pet, friend or family member by the age of six.

How did the ideal age to preemptively discuss death compare with other important topics? Parents said the ideal age to warn their child about ‘stranger danger’ was at four years old, while the topic of sex was best raised at 10, and drugs at 11 years old.

Perceptions of death and afterlife change as kids age 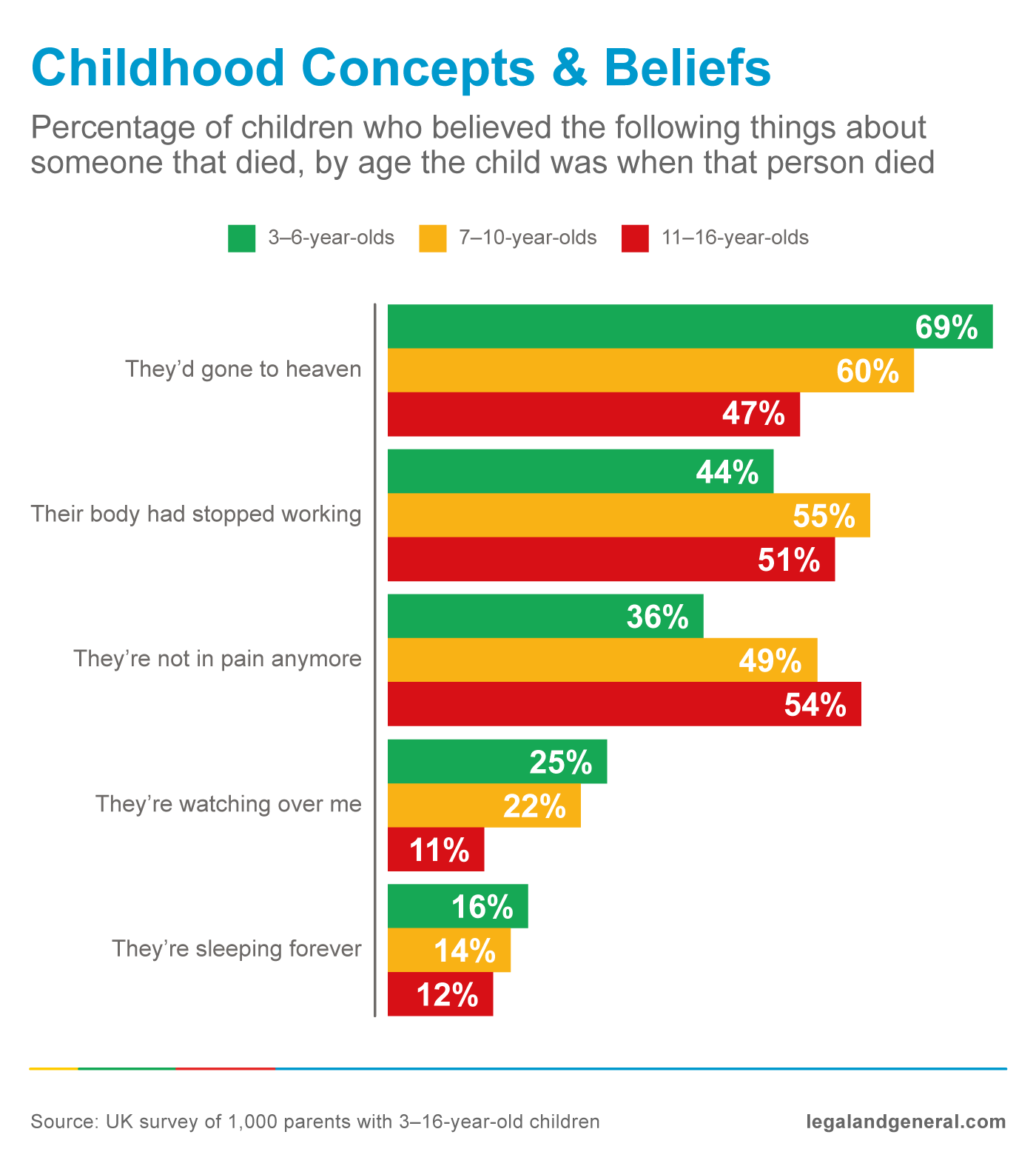 As children better understand death as they get older, their beliefs about death and the afterlife change.

Among kids who’ve lost a family member, the belief that declined most with age was that the person who died had gone to heaven: 69% of 3-6-year-olds believed in heaven, compared to 60% of 7-10-year-olds and 47% of 11-16-year-olds. Only 29% of parents we surveyed believed in an afterlife, indicating their children’s beliefs aren’t just a reflection of their own. The other belief that significantly declined with age was that the person who died was watching over them, dropping from 25% at 3-6 years old to only 11% at ages 11 to 16.

Older children are more likely to hold the view that someone who dies isn’t in pain anymore (54% of 11–16-year-olds, vs. 49% of 7-10-year-olds and 36% of 3-6-year-olds). Older kids were also slightly more likely to understand that the person has died because ‘their body has stopped working’.

Our results show a clear transition from supernatural belief to observational truth in children’s understanding of death and thought process when coping with grief. 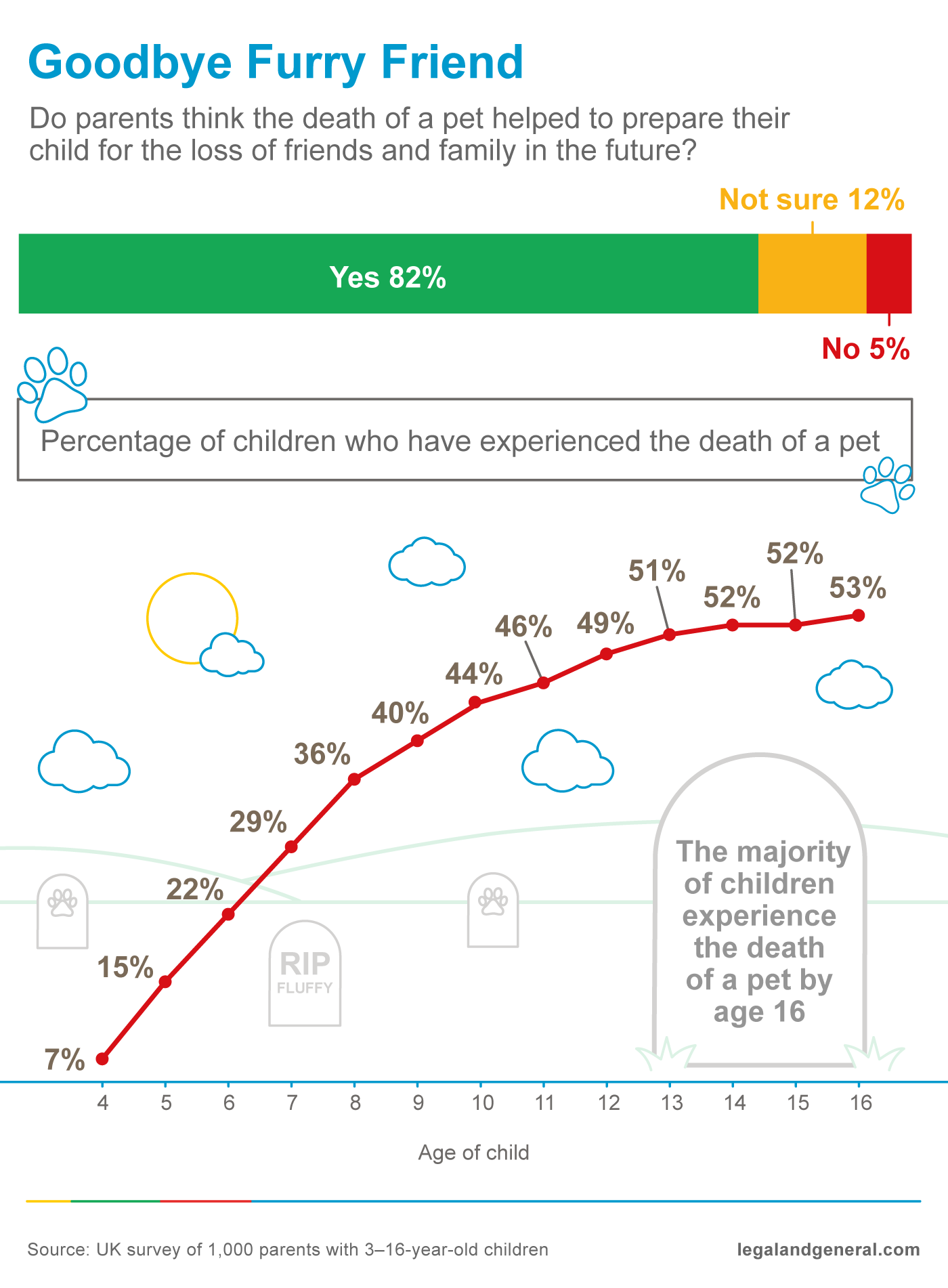 Parents think so, as 8 in 10 surveyed parents whose child had lost a pet said the pet death has helped their child grieve the loss of friends and family in the future. Nearly half (45%) held a pet funeral, giving kids first-hand experience of the steps we all take to say goodbye.

Children learn from deaths in films, books and stories 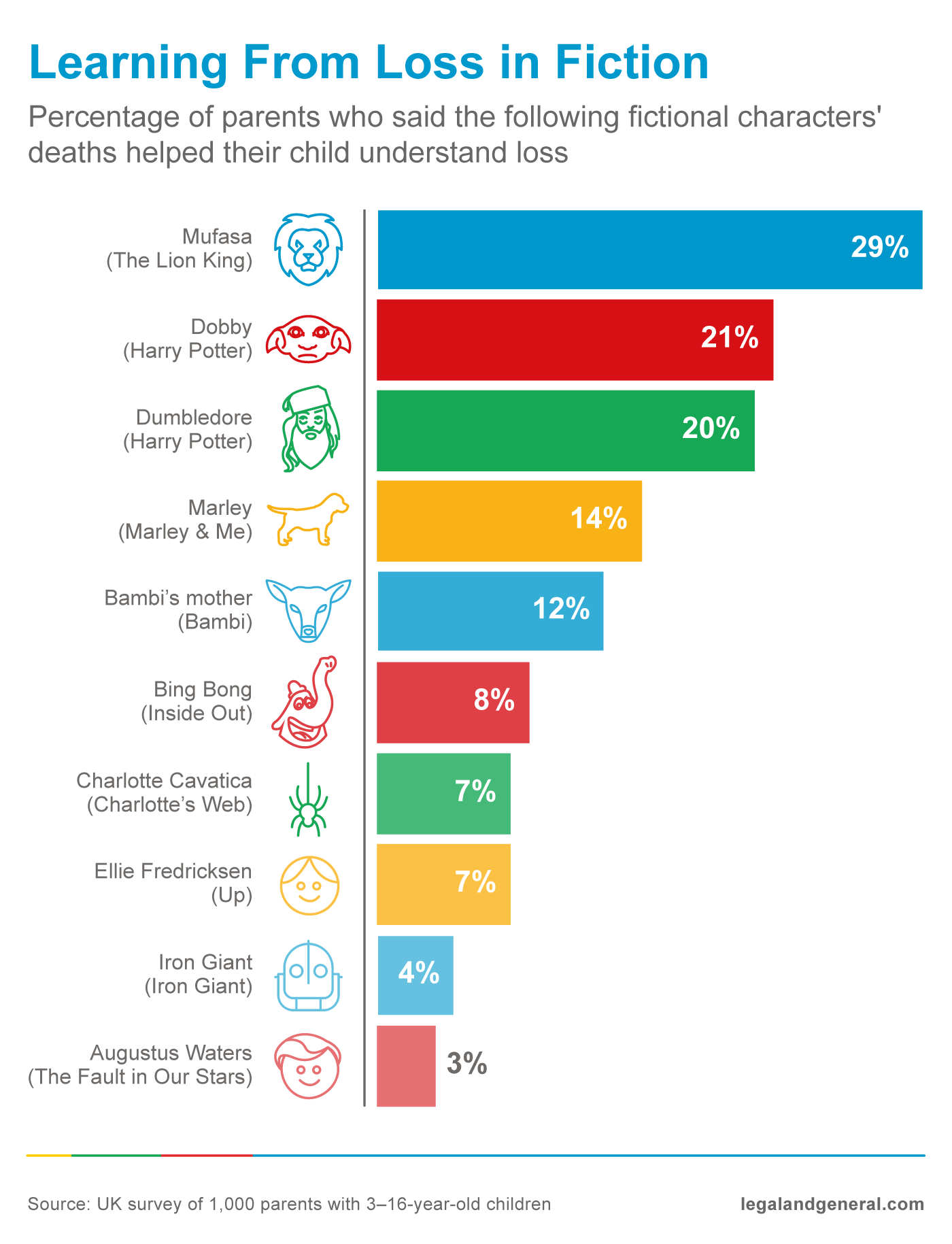 Young children also encounter the concept of death through fictional characters in films, books and TV shows. Characters in children’s films are twice as likely to meet their fate than those in films made for adults and, as far as parents are concerned, it’s no bad thing.

More than half (53%) of parents we surveyed thought fictional deaths helped their child understand death. By understanding what death is from an early age, a child may be better adjusted to cope with grief in the future.

Among popular children’s characters who die, 29% of parents said that Mufasa from The Lion King helped their child develop an understanding of death. One in five parents said the deaths of Dobby and Dumbledore from Harry Potter also helped.

Gone, but not forgotten 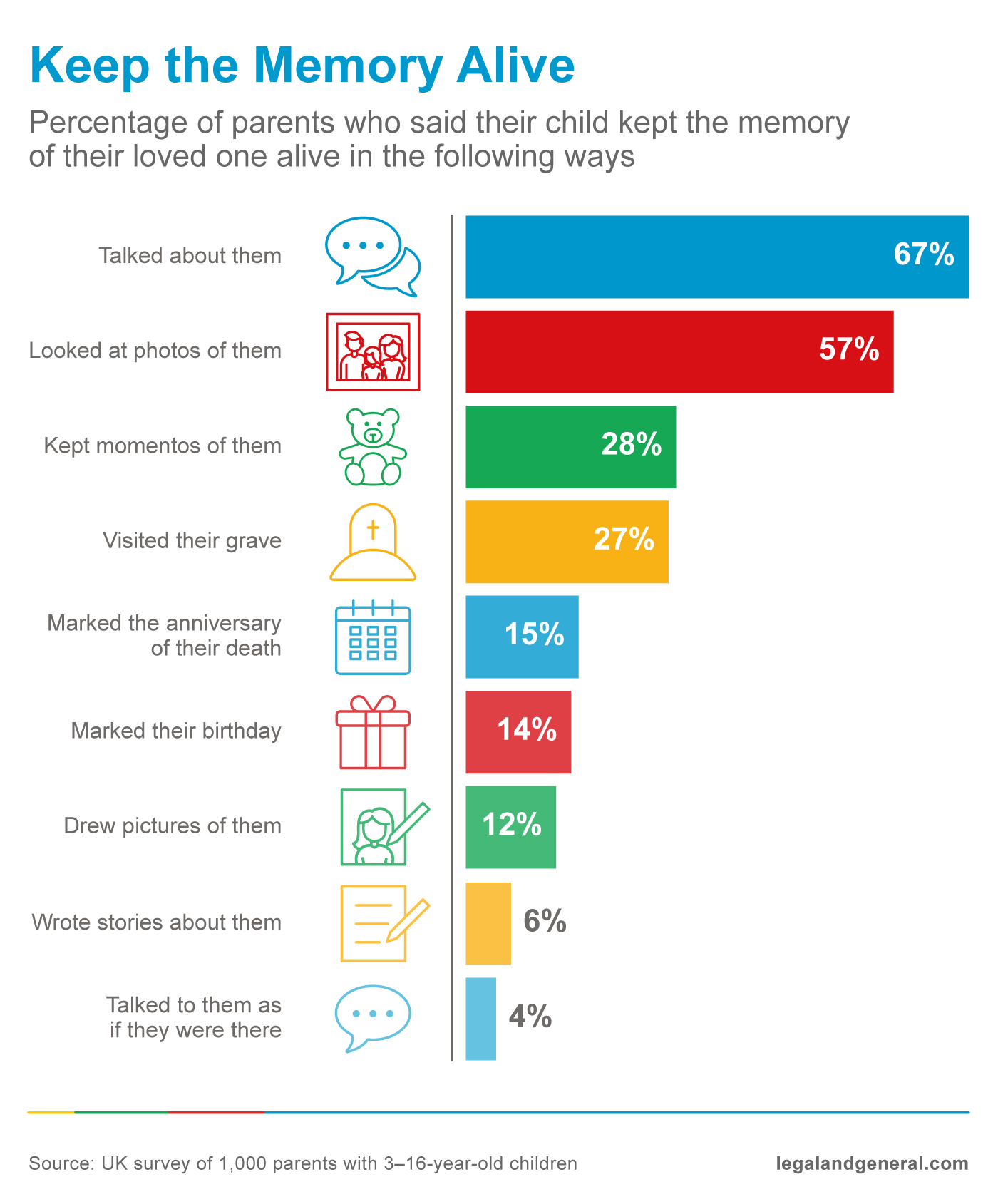 An important step towards coming out the other side of a grieving period is learning how to live without the one you lost. But that doesn’t have to mean forgetting about them. Over two-thirds of kids (67%) who’ve lost a family member keep their memory alive in conversation, while more than half (57%) look at photos to keep loved ones in their hearts.

Over 1 in 4 of these children keep other personal mementos they associate with the one they lost and roughly the same proportion visit the person’s grave. While 15% mark the anniversary of the death and 14% celebrate their late family member’s birthday.

Some children use their creativity to remember those who’ve passed, with 12% drawing pictures of them and 6% writing stories about them. 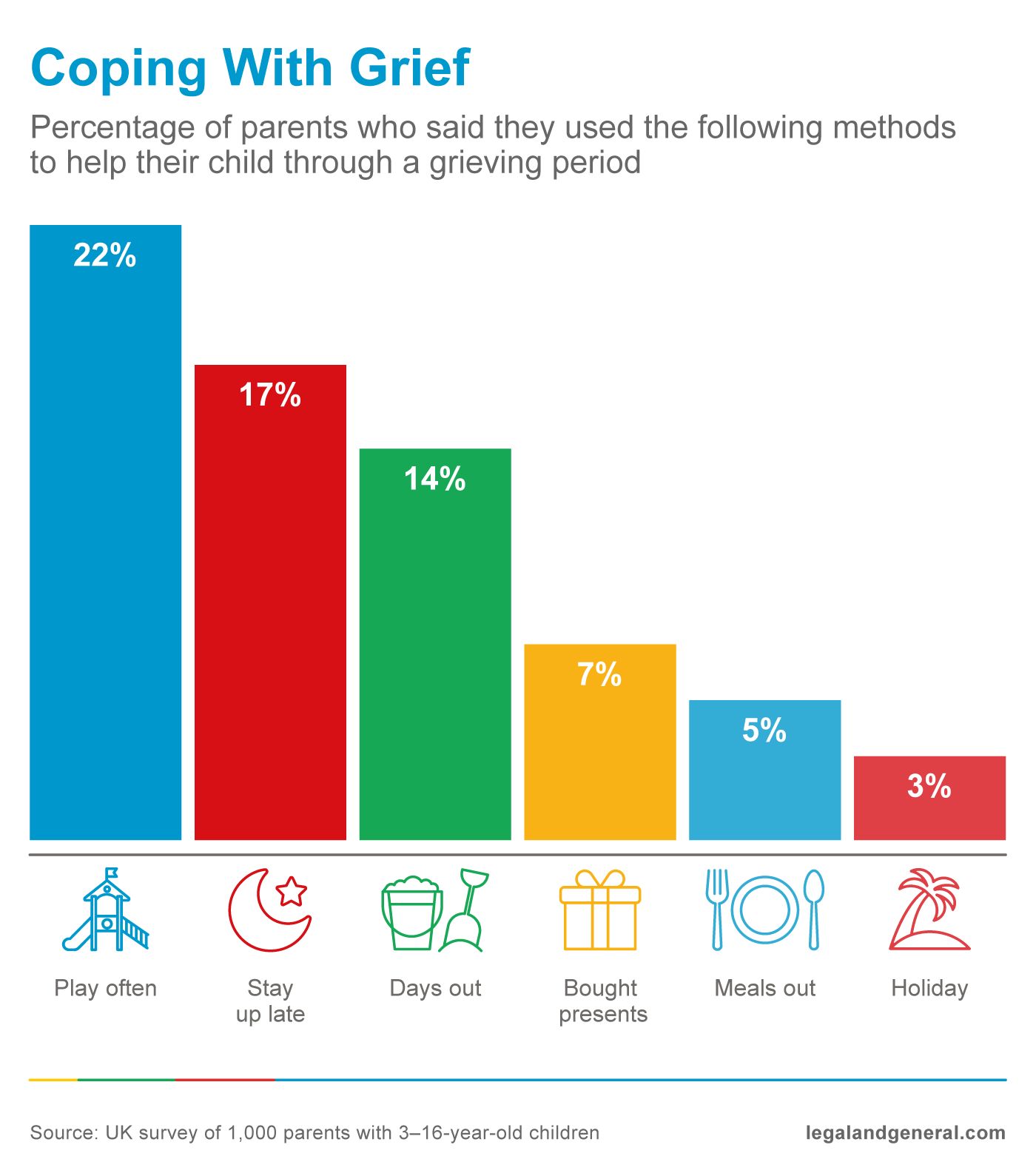 Loss affects everyone differently, which means no two children grieve the same way. However, many parents turn to positive activities and experiences to alleviate their child’s sadness.

More than 1 in 5 (22%) parents said they played with their child more often during their grieving period. Spending quality time with grieving children can help them feel loved and ensure they don’t feel lonely. With 16% of parents saying their child was less talkative while grieving, something as simple as playtime can help them feel supported whether they feel like talking or not.

Grief can even affect a child’s daily routine, as 17% of parents said their child had trouble sleeping following a family member’s death. The same proportion of parents comforted their child by letting them stay up late. This can be a compassionate way for parents to spend more time with their child, rather than leaving them to grapple with their thoughts alone. Equally, the parent may find comfort in their child’s company as they grieve themselves.

Conclusion
No amount of cotton wool will prevent children from having to face the death of loved ones someday. But parents can prepare their child for loss and help them grieve.

The death of pets and fictional characters give children an emotional framework to grieve before they have to contend with losing people they love. Parents can help their kids cope with grief by simply spending quality time together and giving them a chance to ask questions. Mementos and traditions create new space for lost loved ones, so children can move on without leaving loved ones behind.

In the end, there’s no substitute for openness and honesty. For advice on how parents can best speak to their children about loss, we reached out to the charity Child Bereavement UK.

‘Children are naturally curious and often ask questions that we’re not prepared for.  However, it’s fairly easy to introduce the topic of death in day to day conversations – such as commenting on how the flowers in a vase have died (and cannot come back to life again), or insects/animals they may come across – how they no longer move, no longer need food or water.  Creating an environment where communication can flow freely and easily, encouraging questioning, giving open and honest responses, and using accurate language at a level appropriate to their understanding, will all help children to feel okay about raising difficult issues.’

For more advice and support watch our video interview with Dr. Katie Koehler, below, and read our article on Helping children to cope with grief.

Methodology
We surveyed 1,000 British parents of 3-16-year-olds in November 2018 to study how their child understands, experiences and copes with the death of pets, friends and family members. Each survey respondent focused on only one child. Parents with multiple 3-16-year-old children focused on the child whose experience with death and grief they could describe in most detail. Female parents were slightly over represented in our survey sample; where results depended on the parent’s gender, we estimated a weighted average to control for any gender bias.

Fair use statement
We’d love for you to spread the word about our research and use it for any non-commercial purposes. But please link back to this page to give our research team credit and allow readers to see all our results.

Protect what really matters
No amount of money can ever compensate for the loss of a loved one from things like cancer or terminal illness, but life insurance can at least bring peace of mind in hard times. Having financial protection in place gives you time and space to support your loved ones when they need it most.