When Heather and Alan met three years ago (“in the romantic setting of the Premier Inn, Gatwick North,” says Alan), they lived at different ends of the country. Alan’s home was in Glasgow, near family, while Heather lived in Swanage, on the Dorset coast. But a walking holiday in Spain brought them together: Alan is visually impaired and Heather was his sighted guide.

“I’d been on holidays as a sighted guide before,” says Heather. “Walking has always been something I like to do. I had booked a Nordic walking holiday to Swaziland that got cancelled, but about three months later I got a phone call asking if I would be a sighted guide. I ended up walking the Camino de Santiago.”

A mutual love of travel

Alan, who began to lose his sight in 2013, has always been active. A regular at his local rugby club, he was a keen golfer and cyclist until he began to lose his sight. There were a lot of changes in that period; his first wife died and he had to sell their Majorcan villa, as he could no longer drive. “I thought that was the end of my overseas holidays,” he says.

Listen to Heather and Alan’s story

Angellica Bell chats to newlyweds Heather and Alan about how they’re adapting life to remain active and independent despite Alan’s sight loss.

Maintaining our independence is important to us all, and identifying what care we’ll need plays a huge part in this. 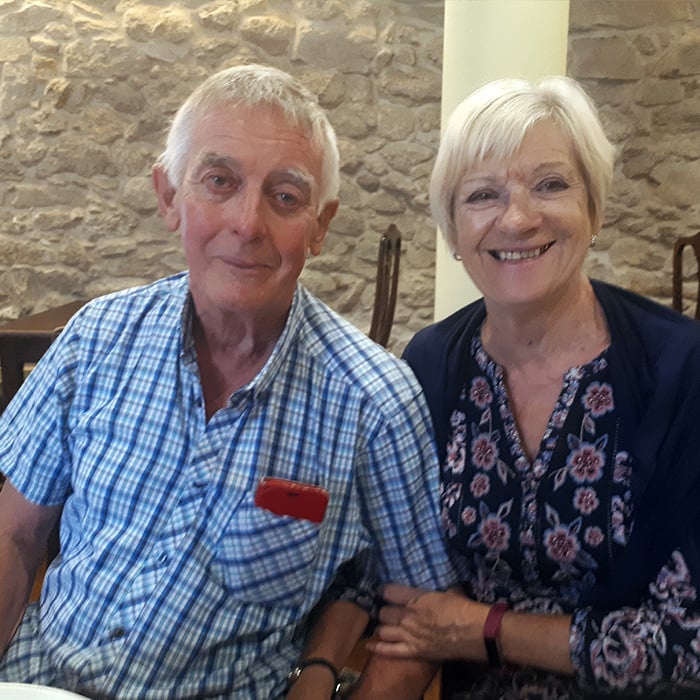 But, after hearing about “walking eyes” holidays from a friend, he booked a trip with Traveleyes and met Heather. They were matched on the trip and, with a common love of walking, romance blossomed.

At first, the couple spent a lot of time in airports, flying between Glasgow and Swanage to see each other. But when budget airline FlyBe collapsed while Alan was on a trip to Swanage, they ended up spending the first lockdown together. After that, travelling back and forth became even more challenging, and Heather took the decision to move north.

“It was crazy, we couldn’t have carried on doing what we were doing,” says Alan, whose eyesight was worsening during this period. “Heather took me and everyone else by surprise, but it was the sensible thing to do, as my family are all up here.”

Adapting to a new life together

Financially, the couple brought different elements to the relationship. Heather released capital by selling her home, but her pension is smaller. Alan’s income from a final salary pension is greater, but he had little in the way of capital. “Between us it works quite well,” he says.

Despite Heather and Alan never intending to remarry in later life, the couple have just got married and bought a brand-new apartment in Glasgow. Alan’s advice for the visually impaired, is to stay in an area you are familiar with. “I won’t pretend I haven’t lost myself once or twice in the last few months,” he says. “You need to look at what you can do independently, what you need help with, what facilities are nearby. I’ve lived in Glasgow for 35 years now, so my rugby club I can walk to, my church I can walk to, shops I can walk to. It’s a question of making sure all the things you’re used to are still conveniently to hand.”

“I am Alan’s eyes,” adds Heather. “The most important thing to remember is I have to put things back where they came from, tell him if I’ve left a cupboard or a door open, and not leave anything on the floor. I have to be more aware and we have to plan a bit more.”

It helps to have family around, but the couple are not making any particular plans for the future, although they’d love to travel more; with gradual life changes such as sight loss, you have to learn to go with the flow. “We’re just going to carry on, keep going as long as we can and take what comes,” says Heather.

You can listen to more of Heather and Alan’s story in their podcast episode of Rewirement, Care and independence in retirement.

Caring for someone with dementia can be unbelievably challenging. Not everyone would have the imagination (or energy) to start a business on the side, but when Feyi became her mother’s sole carer, it planted an entrepreneurial seed.

At 84, Ted has found self-acceptance in retirement after spending many years hiding his authentic self.