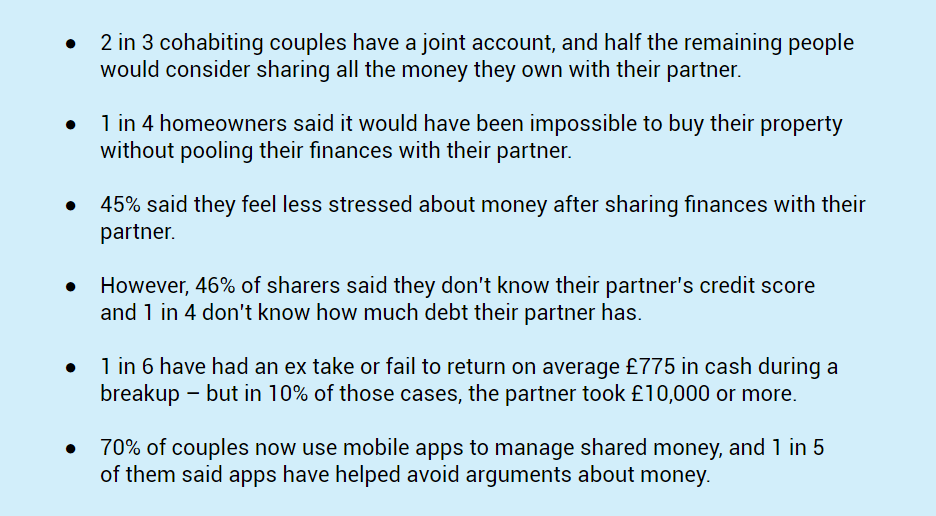 Couples are increasingly choosing to live together before, or without, getting married. In fact, while married couples who live together are still the norm, unmarried cohabiting couples – whose money is separate in the eyes of the law – are now the fastest-growing family type.

At the same time, with a bank account and app for every financial task, couples now have more choice than ever in how they manage their money, either as a team or two individuals.

To explore how finances are shared and separated in Britain today, we surveyed 1,052 people who live with their partners. 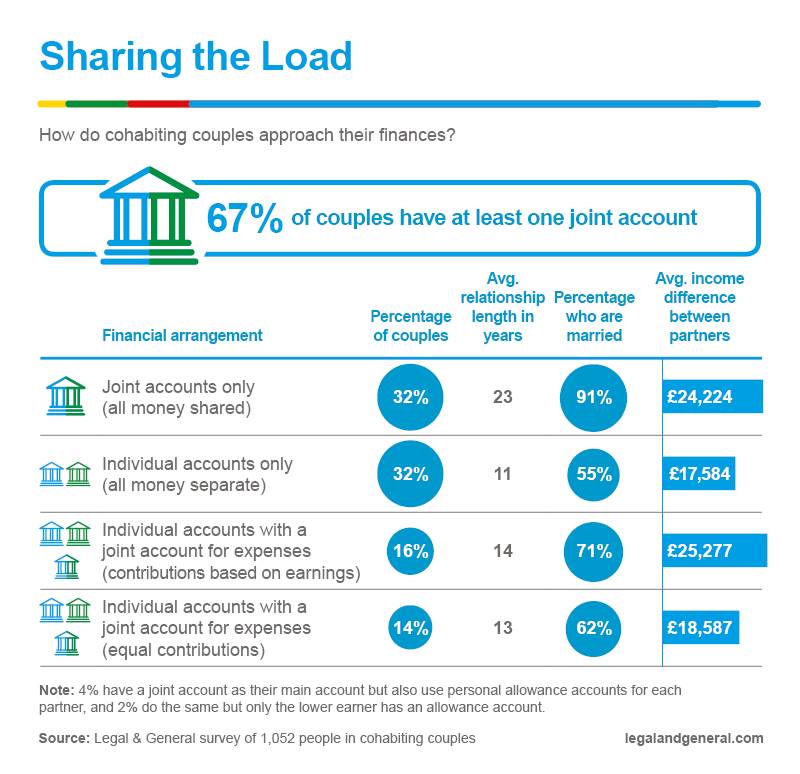 Most couples fall into one of two camps, either sharing all of their income and savings in joint accounts (32%) or keeping their finances completely separate in individual accounts (32%).

The rest use a mixed approach. For example, separate accounts for most things but a joint account for expenses, to which partner’s contribute based on their earnings (16%). Or, the same set-up but with equal contributions regardless of their earnings (14%).

Joint accounts are more common among married couples – 91% of joint account holders have tied the knot, compared to 55% of those with only separate accounts.

The main feature of a joint account is that both partners have equal access and ownership of the money it holds, regardless of who earned the money. Couples that haven’t opened a joint account are on the fence about taking this step. 51% said they’d consider sharing all the money they own in a joint account with their partner, but the other 49% would not.

About 1 in 6 couples without a joint account wouldn’t consider getting one because it’d make breaking up complicated, while 1 in 7 don’t want their partner spending money they’ve earned. However, the most common reason was simply that they’ve never considered pooling their wealth (36%), which is surprising because sharing finances helps couples overcome their biggest financial hurdles. 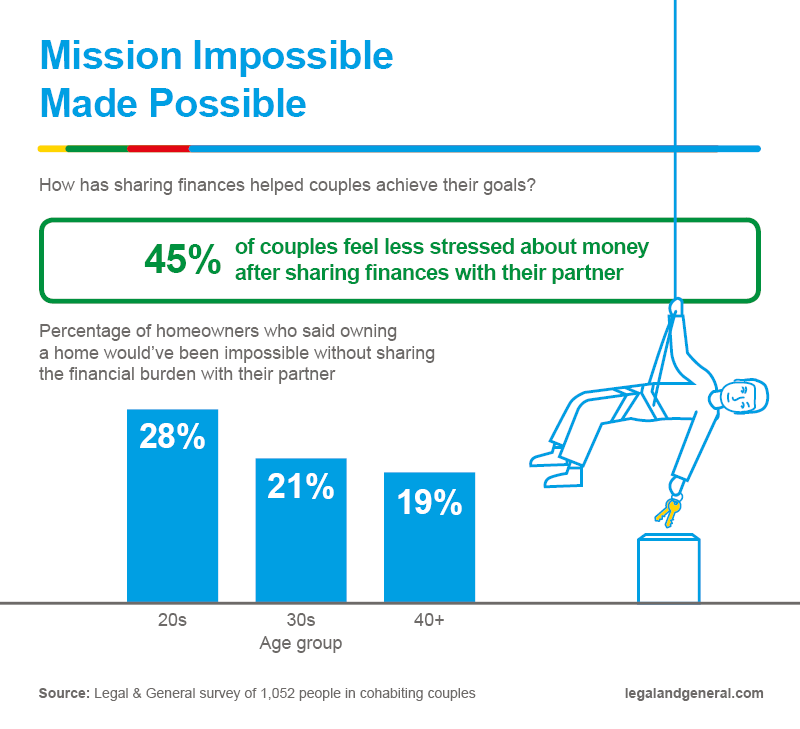 The average UK house price in September 2019 was £234,000, £3,000 higher than the previous year. For many people, the only way to become a first-time buyer is to step onto the ladder with their partner.

Even among couples over the age of 40, many of whom got onto the property ladder when house prices were lower, 1 in 5 said securing a mortgage without their partner would have been impossible.

It’s a similar story for cohabiting couples who rent their homes. 52% who rent said it would be more difficult to do so without their partners’ financial contributions, and 20% said renting would be impossible.

Sharing money can turn an impossible dream into reality, but does sharing finances with one’s other half reliably reduce stress?

45% said they feel less stress after sharing finances with their partner compared to when they kept their money separate. A smaller proportion (14%) said they feel more stressed about money after sharing, while the remainder (41%) said that not much has changed – their stress levels related to money are as high or low as ever.

To keep stress levels low when sharing finances, it helps to know your partner’s financial situation, because with joint accounts and mortgages, for better or worse, you’re in it together.

We asked people which key pieces of their partners’ financial information they didn’t know... 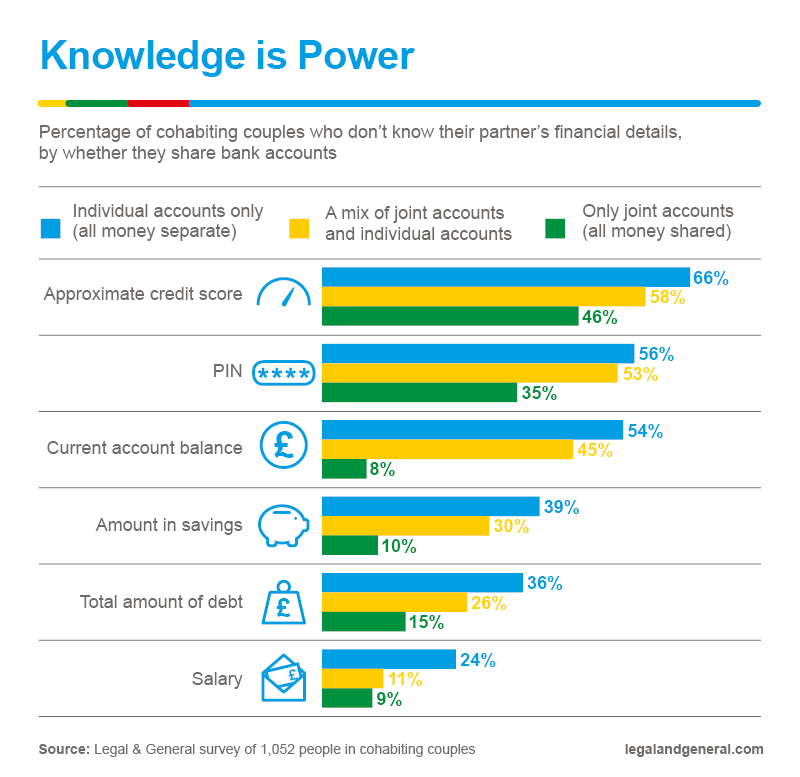 The majority of people who live with their partner but keep all finances separate don’t know their partner’s credit score (66%), PIN code (56%) or current account balance (54%). But it could be argued they don’t need to – after all, their finances are separate.

However, joint current accounts create a financial connection between account holders – if one of them overspends, it’s their joint responsibility to cover the cost. 46% who have all their money in joint accounts said they don’t know their partner’s credit score, not even approximately.

Over one-third of people who keep their finances separate from their partner said they don’t know how much debt their partner has, which could become important if one day they choose to share a joint account (as we saw earlier, half of these people said they’d consider sharing all finances in the future).

With careful planning and clear communication, managing joint accounts can be a pain-free experience, but what happens when partners decide to go their separate ways?

Men were more likely than women to say they left a relationship with under 50% of the belongings they shared with their partners. 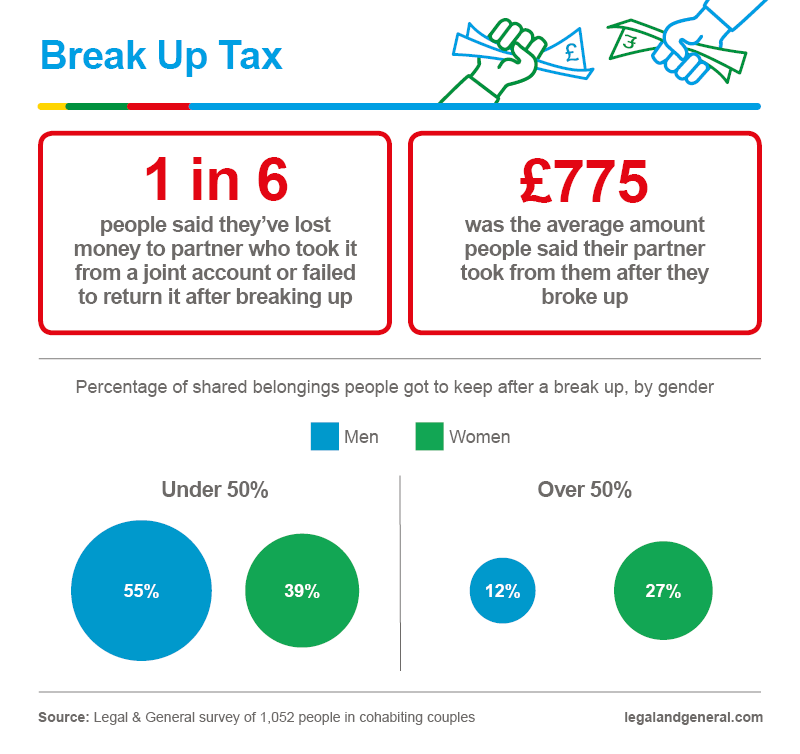 Breakups can be messy and complicated, not least when figuring out what each person is owed. If a couple buys a sofa, TV, or even a pet, how do they split them?

1 in 6 people in cohabiting couples said they’d gone through a breakup that ended with their ex-partner keeping money that was rightfully theirs, either because it was in a joint account or owed to them. That’s approximately 3.4 million people. On average, people said their partner took or failed to return £775 in cash (excluding large jointly owned assets). 25% of people who lost money to an ex-partner – roughly 850,000 Brits – said their ex took off with £2,500 or more, while 10% (340,000 people) lost £10,000 or more. 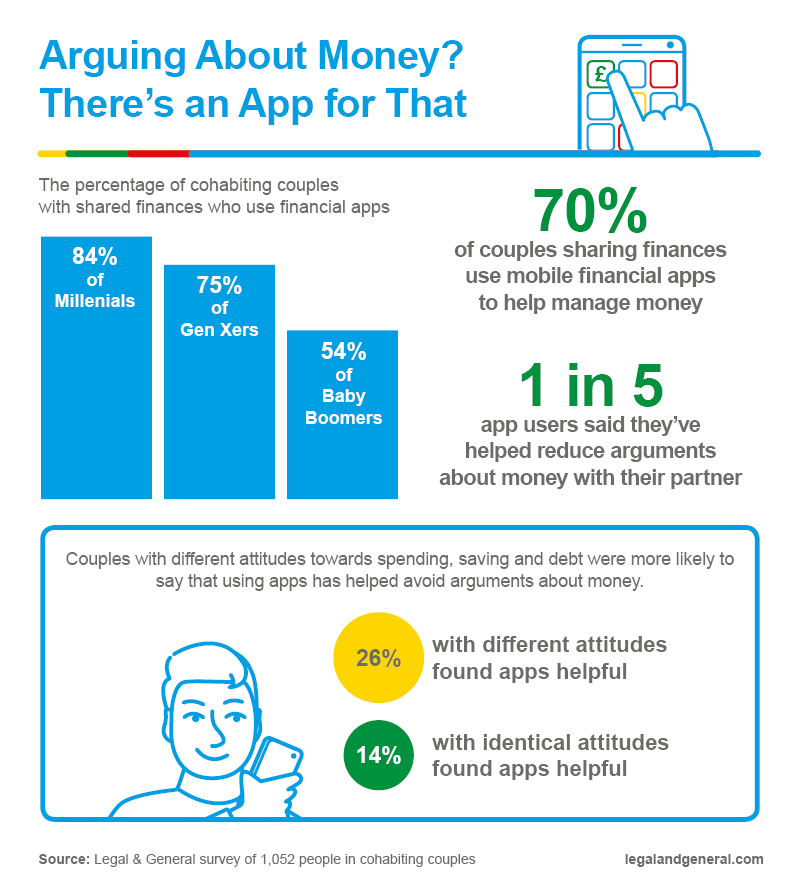 The days of managing one’s finances by sorting through stacks of paper-based bills are over. It’s been predicted that mobile banking will be more popular than visiting a high street branch within two years, and there’s evidence that people now prefer checking their accounts via apps over online banking in a browser.

For couples, financial apps can help by allowing both partners to share information – account balances, recent purchases, and breakdowns of spending by category (e.g., food, entertainment, utilities). 7 in 10 couples who share finances said they use at least one app to help manage their money, but apps are most popular among younger couples (84% of millennials vs. 54% of Baby Boomers).

1 in 5 couples who use financial apps said doing so has reduced the number of arguments they have about money, and it seems that apps which provide a shared view of finances are particularly useful for reducing arguments when couples have different attitudes towards money. Among app-using couples who said their attitudes were different (e.g., they have different views on how much to save, spend or borrow), 26% said that apps have reduced arguments, compared to 14% of couples with identical financial attitudes.

Financial arrangements between couples are by no means ‘one size fits all’. There are those who share everything jointly (32%), those who keep all money separate (32%) and some in the middle who use a mixed approach (36%).

No matter which approach couples take, even the best laid plans can go awry when they split – 1 in 6 people said they’d lost money that was supposed to be shared when they went their separate ways (£775 on average, but 1 in 4 lost at least £2,500).

For the most part though, people were complimentary about their partners’ attitudes towards money. When asked to sum-up their attitude with just one word, only 22% chose a negative word (the top three were careless, frivolous and tight), while 67% chose a positive word (top three: careful, sensible, cautious). The other 11% of words were more ambiguous, like laid-back, laissez-faire and free-flowing.

Legal & General surveyed 1,052 British people in cohabiting couples in November 2019. Respondents were aged 21 to 81, 523 of whom identified as female, 524 as male and five as other genders. Only couples living with each other in the same property were surveyed, as we wanted to explore how cohabiting couples manage their money.

The words respondents gave to summarise their partner’s attitude towards money were coded as positive, negative or ambiguous by using Sentic word lists categorised by sentiment. Manual review of the words and their coding according to the lists was used as a sense check and to decide if the categorisation of words felt accurate in a financial context.

The estimated number of people who’ve lost shared money to a partner was calculated using the percentage of respondents who said they’d lost money to a partner during a breakup, in combination with population estimates by marital status and living arrangements from the Office for National Statistics.

We’d love for you to share the word about our research into how couples manage their money. All we ask is that you link back to this page so our researchers get credit and your readers can see the full findings.