Arranging care at home for a loved one

Bringing her father back to his own house after 10 months in a care home seemed like the right thing to do. But Jacqui had no idea how hard looking after him by herself would be.

Here, Jacqui, her father John, and his carer, Colette, share their accounts of this emotionally challenging time.

Looking after a parent at home: The daughter

Jacqui says: “The decision to take my dad out of the care home wasn’t a popular one. Relatives worried I may not have thought it through properly – and maybe they were right. But after 10 months in the dementia unit, following a major stroke in 2019, I could see my dad had become lonely and depressed. I thought that bringing him back to his house in Dagenham would aid his recovery.

I was in such a hurry to remove him from the situation that was causing him distress that I hadn’t thought about what was going to happen next. He needed 24/7 care. Who was going to provide that?

Choosing the right care for your loved one

We can help you understand your care options.

As I watched my dad teeter up the stairs in his house for the first time in a year, I wondered how this was going to work. At 58, with four flown-the-nest children, I was suddenly free to be where I wanted to be. I’d recently moved out of London into a flat in Sussex with views of the sea, but now it seemed I wouldn’t be living there. I decided that I would need to stay with my dad.

He was happy to be home, but I quickly realised that caring for a 77-year-old man with vascular dementia was a full-time job.

He’d wake up several times a night, often coming into my room ‘for a chat’. Sometimes he’d need the toilet and I had to get up to assist him. Once, I found him having a shower at 2am. He’d wake up worrying about things that didn’t matter. Another time, he shouted me awake, telling me it was three in the afternoon when it was three in the morning; it was often like caring for a toddler.

I felt sorry for my dad, but was starting to feel sorry for myself, too. My time with my dad was turning into a time of self-pity. It was a strange kind of pity though – normal pity mixed with a kind of niggling anger and gut-wrenching disappointment. That’s my dad standing there – addled, lost and embarrassed. Not the dad I once knew, but an imposter; a shadow of the man he used to be. I realised then that I wasn’t able to look after him full-time.

How does care at home work?

I started looking into getting a 24-hour carer. At that stage I didn’t even know whether such a person existed. Or how much they’d cost.

How to cover the cost of care

We can help you understand what financial support is available.

Dad told me he didn’t want a carer – he wanted me to look after him. I told him I wasn’t able to do that, that I had a job, and a life by the sea. He was gutted. I felt like the meanest daughter alive.

To start with, I got my dad assessed by the local council to see if he qualified for financial assistance for a live-in carer. A social worker came to his house and we discussed my dad’s needs. Fortunately, he was eligible and was awarded the maximum amount.

Three months later, he was re-assessed and the amount was reduced. This was difficult news to hear, because Dad and I had budgeted for a full-time live-in carer’s salary, based on the original amount of funding we would receive. Fortunately, my dad can just about afford the top-up.

I found Colette through a Facebook friend. She’s like an angel sent from heaven and my dad loves her. With Colette caring for my dad, I can breathe again and don’t have to worry so much. I don’t know what I’d have done if she hadn’t come along.”

Supporting the family: The Carer

Colette says: “I was already employed by an agency when a friend told me that someone she knew was looking for a live-in carer for her father. I’ve been with Jacqui’s dad John for a few months now, and it’s going well.

As a person, John’s warm, friendly and easy to talk to. He enjoys a good conversation and likes to share meals with me, which isn’t always the case with some of the people I’ve cared for. It’s a nice job and very satisfying when he tells me he’s well looked after, and that he feels safe and happy.

We spend hours chatting about the world, culture and places. Whenever it’s sunny we go to the local green and soak in the sun and I explain to him how good this is for his immune system. I tell him that when the weather gets better we’ll take a picnic and eat in the fresh air.

I encourage him to do simple exercises when he’s sitting: stretches, circles, lifting his legs to activate circulation. He also leans against a handrail on the wall for bends and lunges. Most days he walks to the end of the front garden reasonably well with the aid of a Zimmer frame, but some days he finds it hard, so I cut the walk in half. I try to gauge where he’s at on any particular day or he gets agitated if he feels pushed beyond his ability.

John always enjoys company and knowing he’s never alone in the house. Sometimes he thinks I’ve left the house without telling him and gets nervous. This also happens during the night, so I wrote a message on my door to let him know that I’m in my room and that he’s safe and well. He finds it re-assuring and reads it every night on his way to the bathroom.

Receiving care at home: The father

John says: “I’m happy to be home as I was pretty fed up in the care home. It was a pleasant place, and the staff were lovely – really nice, kind people – but some of the residents were really unwell and I found it hard to make friends. I ended up just staying in my room most of the time. After a while, I became miserable and couldn’t see the point in living – just sitting in a chair, staring out of the window, day in, day out.

Because I’d had a stroke, my powers of concentration weren’t great. I wasn’t able to watch TV or read a book. Since I’ve been home, I can watch TV for short periods of time and I’ve started to read again – only a page a day, but that’s an improvement.

Now that I’m on a vegan diet , my diabetes has cleared up and I don’t have to have insulin injections anymore. I’ve also been taken off three other tablets I was on, which I’m very happy about. Since having the stroke I’ve lost four or five stone in weight, which is good because I was overweight before.

My daughter looked after me when I first came out of the home but now I have Colette. She’s a lovely person – very intelligent, warm and kind. She’s a great cook and makes me delicious vegan food.

I sometimes miss the home and I feel bad that I left so suddenly without saying goodbye properly. Being at home can be a bit boring – I feel I should be doing more – but, at the end of the day, I’m happy to be home.”

If you’re in a similar situation to Jacqui and looking to arrange care for a loved one, you can find information on different care options, as well as how to find out if you’re eligible for support in paying for care, on the Later Life care section of our website. 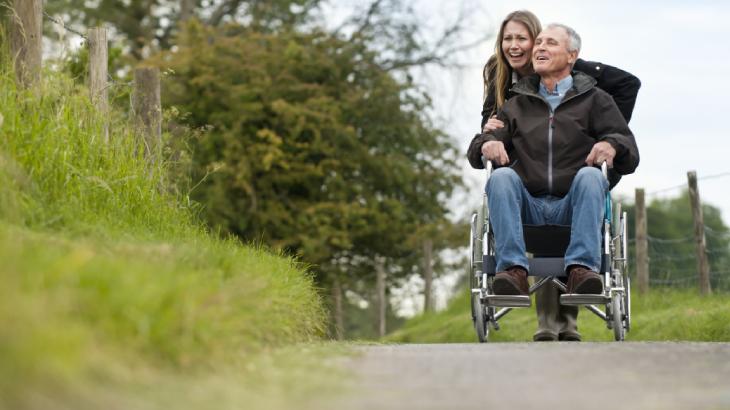 The cost of care

Do you know what the cost of care is in your area? We look at how much it could cost you to fund your- or a loved ones - care needs , and where to go to if you need support.

Sam shares her experience of juggling caring for her father and child, plus advice for anyone finding themselves in a similar position,.