We polled more than 1,000 UK parents with children aged 16 or under to discover what modern parenting looks like in 2020. To get the broadest possible response, we spoke to a wide range of parents, including single parents, married parents and unmarried cohabiting parents. We surveyed birth parents as well as adoptive parents; in 2018-19, one in seven adoptions1 in England were by LGBT adopters. So whether you’re mum, mummy, dad, daddy, or whichever term you prefer, here’s a summary of our main findings:

A parent’s love for their children is timeless. But, while some things never change, the role of a parent has evolved over the years as society adapts to changes in work habits, technology and social attitudes.

And, of course, 2020 has been a year like no other. For families, the impact of school closures, home working and limited outdoor opportunities has taken its toll. As we look ahead to a life beyond coronavirus, what are the chances that technology, new legislation and shifting parental roles can change parenting for good?

We commissioned a survey to find out the views of parents across the UK.

Some of the most striking findings came in relation to how mums and dads, whether they be married, unmarried, single parents, birth parents or adoptive parents, view parental leave.

Since April 2015, shared parental leave has been available in the UK, giving parents the right to share up to 50 weeks of leave and 37 weeks of pay. And, on the face of it, our survey shows that dads in particular are receptive to the idea. 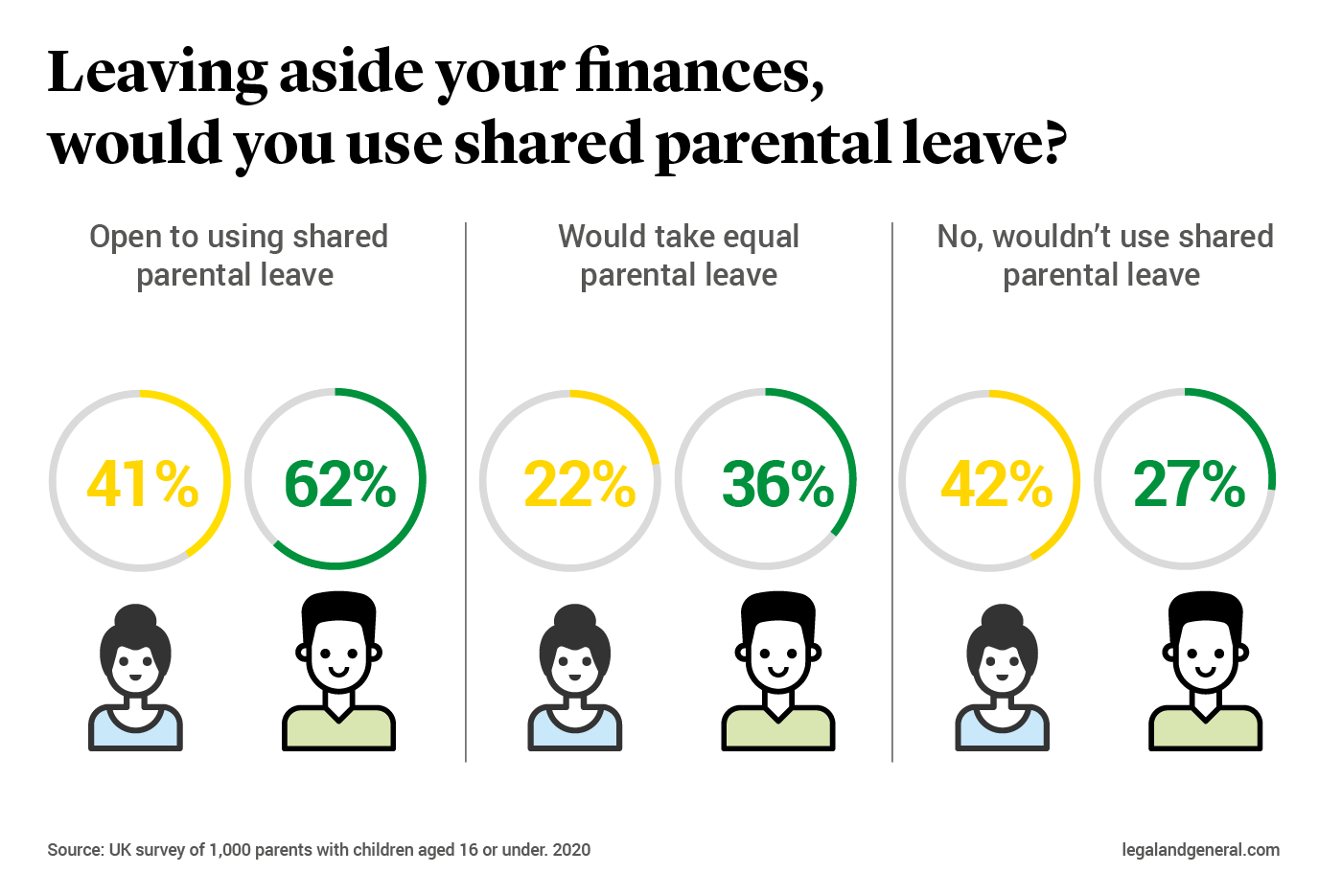 We also found that young parents (aged 18-24) were the most enthusiastic about shared leave – 69% said they would split their time equally, or more evenly.

Regionally, parents in Greater London were the most interested in shared leave (62% would take equal or more equal leave), followed by the north-west (61%). But if we look at cities in isolation, Glasgow had the highest percentage of parents who said they would use shared parental leave (68%), while Belfast (33%) was the lowest in the UK.

While there’s no shortage of enthusiasm for shared leave, in reality the take-up of the policy is low – less than 1% according to some estimates. To be eligible, there are various criteria to meet; for example, the birth parent (or primary adopter) has to be an employee rather than self-employed.

Beyond the policy itself, a study by the University of Birmingham2 uncovered other barriers to take-up, including workplace culture, societal expectations and financial pressures; for example, in many households, men are often the main earners. Interestingly, 54% of dads reported that they’ve experienced gender bias, versus 50% of mums.

In 2020, shared parental leave might sound like a good idea but, for many families, the issue isn’t quite so simple. Should we welcome the fact that a primary caregiver, regardless of gender, wants to spend as much time at home with the family as possible? Or should caregiving responsibilities and parental leave be shared more equally?

The parent trap: who does the chores?

Despite progress towards equality on a legislative level, our survey shows that women still shoulder the greater burden when it comes to running a household. We asked parents of all family types to tell us who they think does the lion’s share of each task. 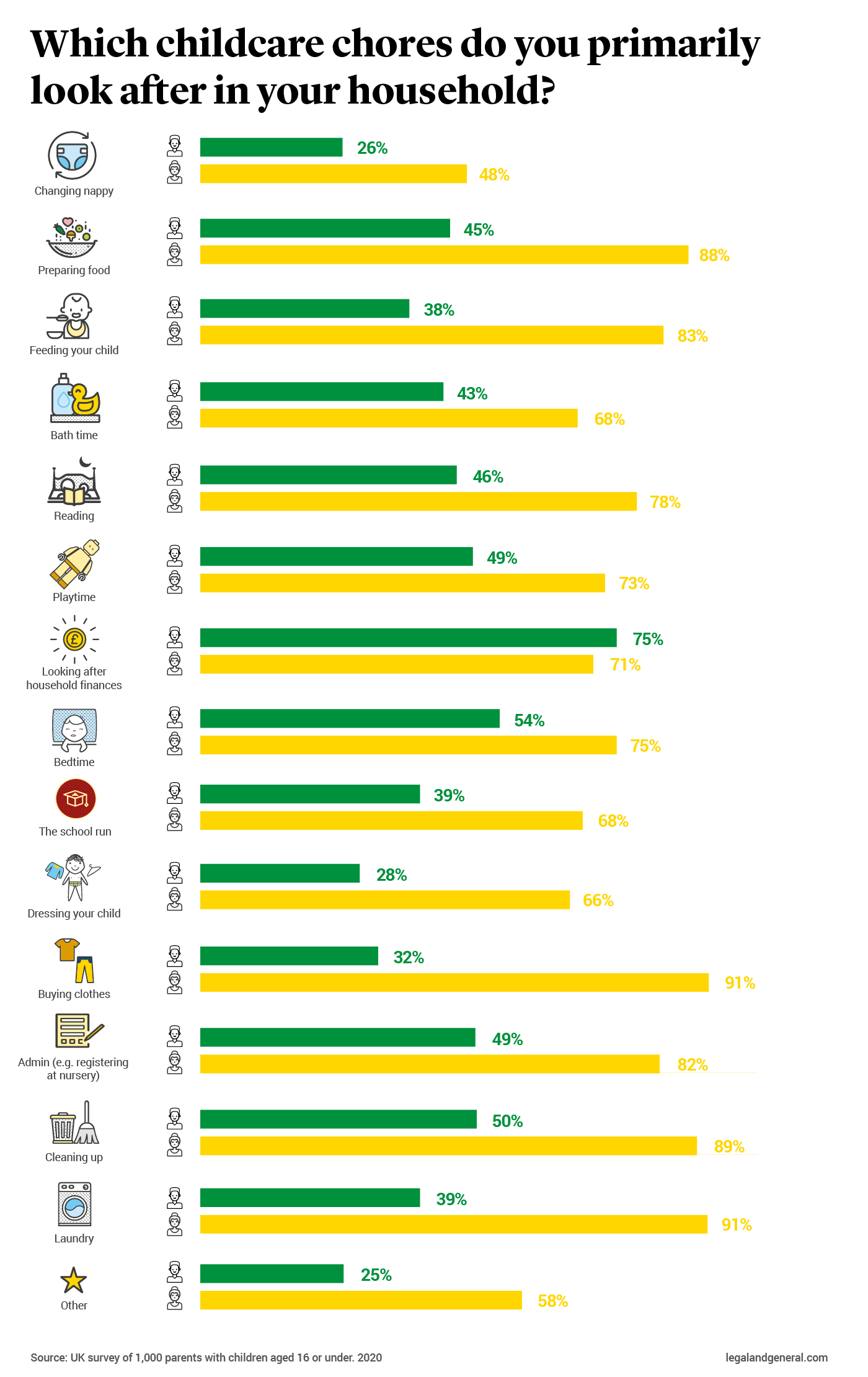 As the graph shows, mums told us they’re primarily in charge of every single parenting task, with the sole exception of ‘looking after the household finances’, which the dads are narrowly more likely to claim the main responsibility for.

How can we explain the gender gap when it comes to household chores? On the one hand, fathers are entitled to a mere two weeks’ paternity leave and pay, and our survey suggests that many dads would like to have more time off – 51% told us they would even consider becoming stay-at-home parents out of choice.

However, it’s not simply that mums spend more time at home on maternity leave, since we spoke to a range of parents with children aged up to 16. In fact, in a separate NCT study3 of women returning to work, the most common concern was childcare, followed by having ‘time to do everything’. It seems that for all the advances for women in the workplace – from a 53% employment rate in 1971 to almost 73% by 20204  – there has been no let-up in the demands of home life.

Time for a change?

Our survey shines a light on the challenges of modern parenting, but what about the opportunities ahead?

The 2020s have already witnessed severe disruption across the world due to the coronavirus pandemic. The changes to family life brought about by school closures, home working and tightened household budgets have been profound.

Our survey found that almost half (45%) of UK parents struggled to keep their children entertained following the March 2020 lockdown – this was the biggest concern cited by parents of almost every age, gender and location.

But, looking to the years ahead, what are the changes that parents would like to see? 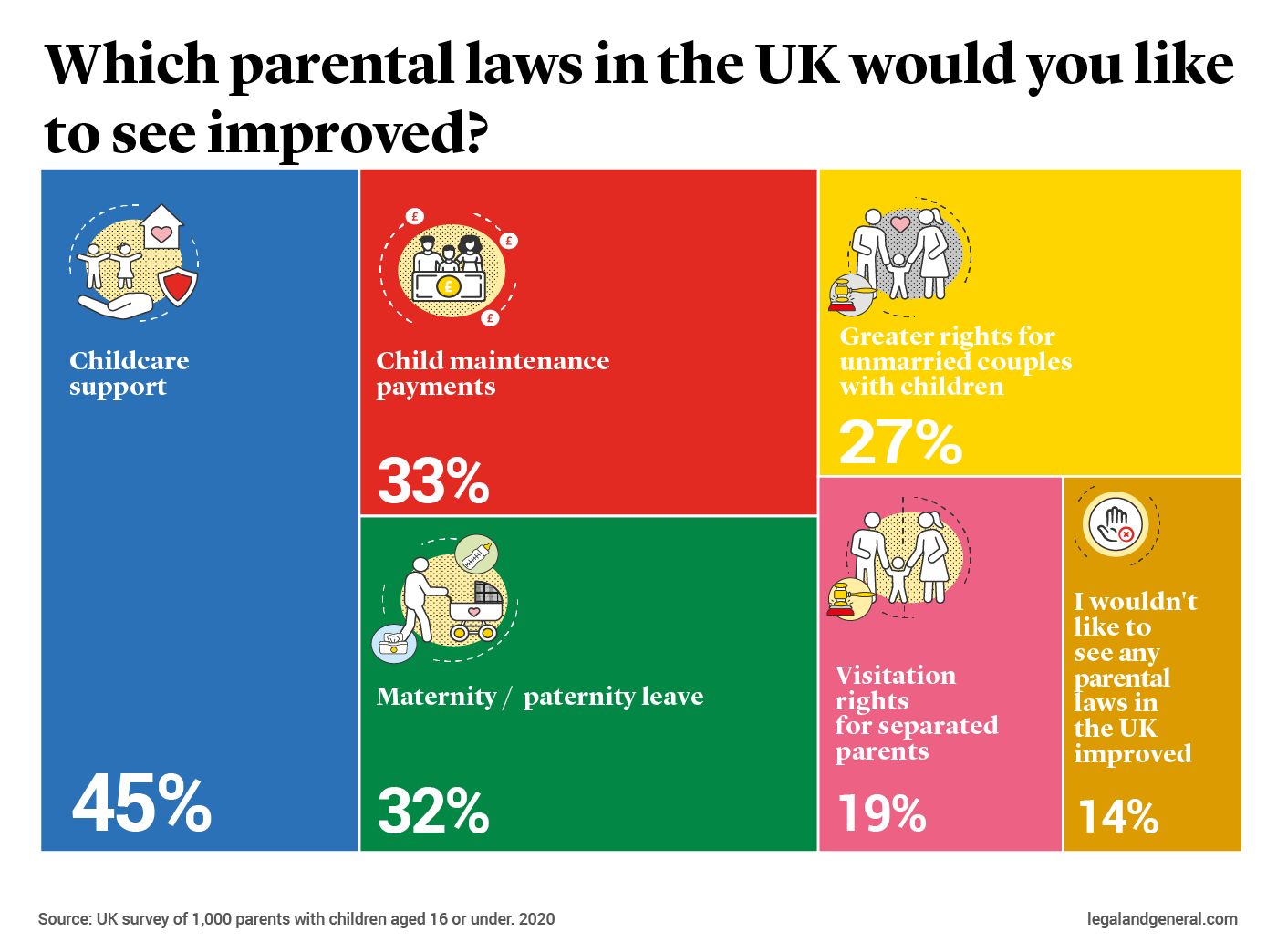 As far as parents are concerned, childcare is the issue with the greatest room for improvement. In England, all 3 to 4-year-olds are entitled to 570 free hours of childcare per year, which is usually taken as 15 hours a week during term time. Some parents can claim up to 30 hours for their 3 to 4-year-old, subject to eligibility criteria. But is this enough?

The average cost of a part-time nursery place (25 hours a week) is £6,800 a year5, according to the Coram Family and Childcare survey for 2020. And according to the Office for National Statistics (ONS), median household disposable income in the UK was £29,600 in 20196 , so based on these figures, families without additional support would spend around 23% of their income on childcare. For many parents, does it even make financial sense to return to work full-time? Our survey suggests that there’s room for improvement, with childcare support cited as a priority by parents of all backgrounds.

While childcare is the biggest concern for parents overall, we also found that the greatest priority for young parents is to improve the rights of unmarried couples with children – the fastest growing family type in the UK7. 38% of young parents cited this as their first priority; childcare support was their fourth preference (26%) behind improved legislation on maternity/paternity leave (36%) and child maintenance payments (31%).

Improved child maintenance payments was highlighted as a priority for one in three parents - but this rises to 46% among single parents.

Is technology the answer?

Worries about too much screen-time are nothing new, but in the context of coronavirus, has technology proven to be a godsend for parents? 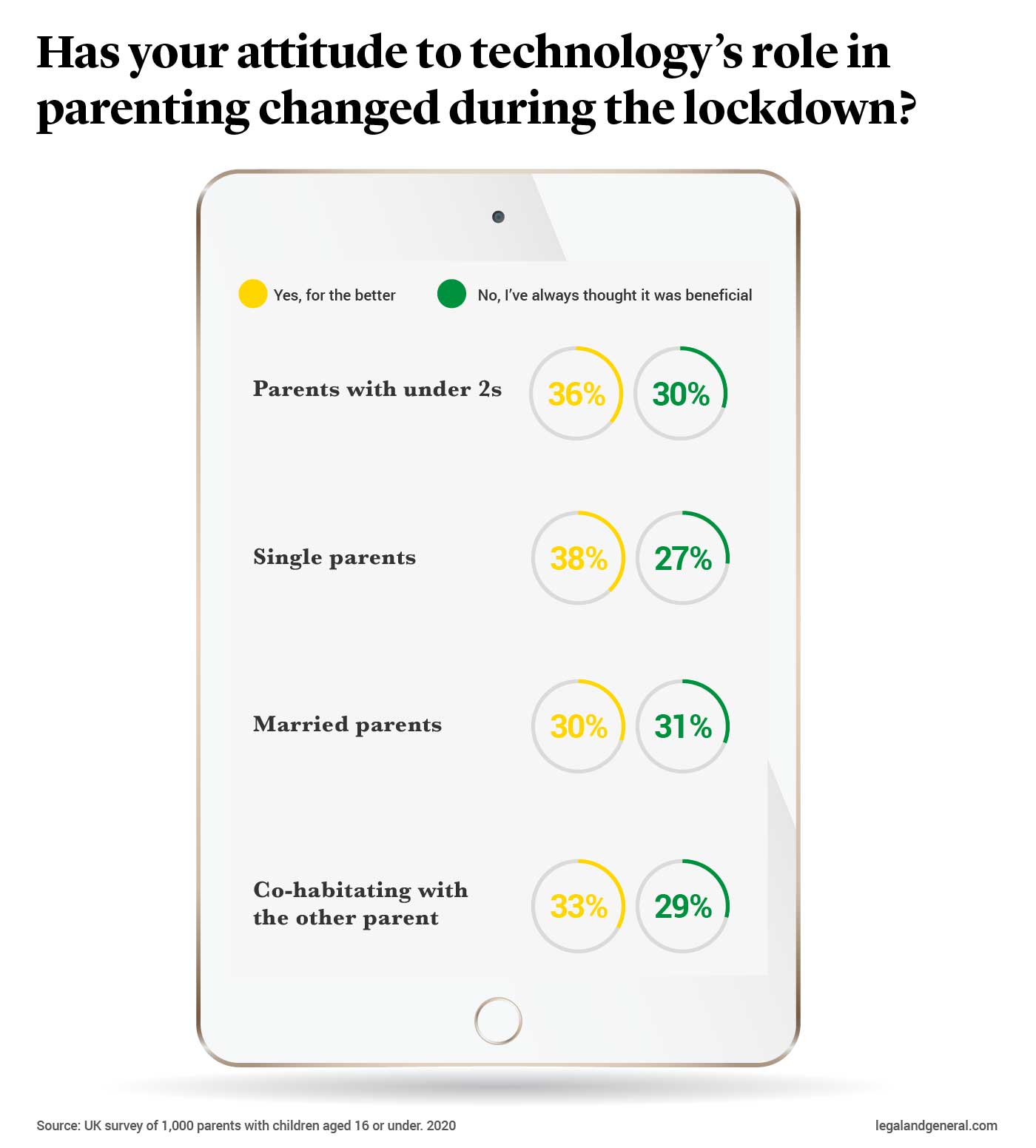 Across all categories, more than 62% of parents approved of technology in general, with particular enthusiasm among single parents, young parents and men. But how are parents using technology in the home? Educational influencers were cited as the most useful online resource for children (37%), followed by fitness influencers (30%).

While it’s positive to see that technology has come to families’ aid at a difficult time, for many parents, there’s a debate to be had on the role screen time has in modern parenting. Our survey found that mums are much more likely to read to their children; 78% claim they primarily do this, compared to 46% of dads. So while technology can help facilitate learning, is there a danger that we forget the benefits of tried-and-tested home schooling?

No two families are the same, and we wanted to canvass the views of various parent types to see how their experiences of family life differ.

We sought the opinions of birth parents as well as adoptive parents, of whom many are same-sex couples. According to the ONS’s most recent UK figures, in 2018 there were 232,000 same-sex couple families, an increase of 53.2% compared to three years earlier. Around a third of same-sex couple parents are married – a significant number given that same-sex couple marriages were only introduced in 2014.8

To a large extent, we found that parents’ experiences and preferences are influenced by their economic realities. For example, 55% of UK mums and dads would consider becoming stay-at-home parents. Of those who wouldn’t, almost two-thirds (66%) said they couldn’t afford it, while mums were more likely than dads (39% to 32%) to say they would get bored.

There was a sharp generational divide in terms of the perceived barriers against becoming a stay-at-home parent. Among young people, social attitudes, and not just cost considerations, come into play; for example, 19% of young parents said the stigma surrounding stay-at-home parents would put them off – a higher response rate than any other age group. In contrast, young people were the least likely to cite affordability as the main barrier. 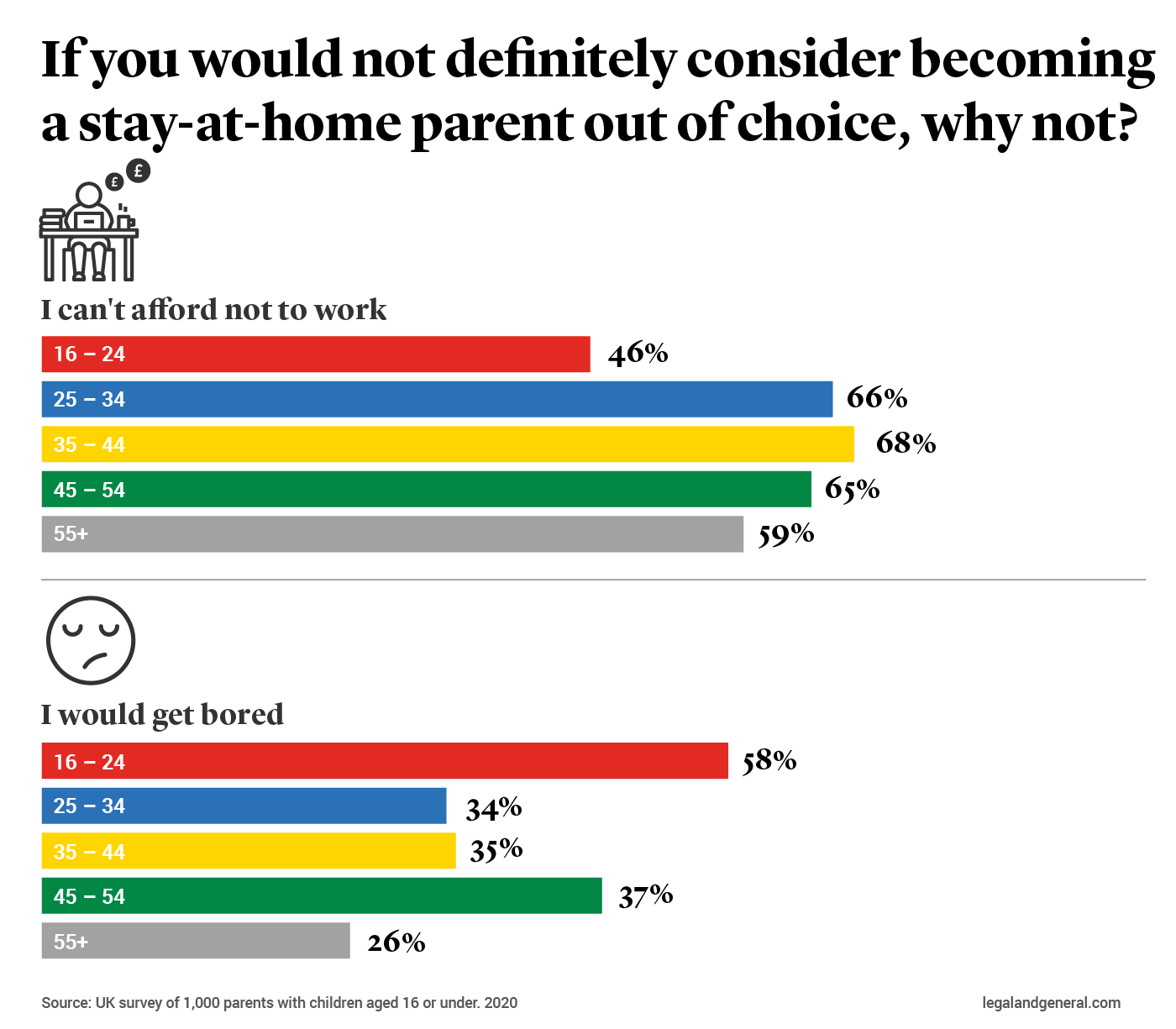 Beyond issues of work and money, we also wanted to see how levels of optimism vary across different families. Faced with an uncertain future, parents are generally more optimistic than pessimistic (36% versus 34%) about the world their child will grow up in. 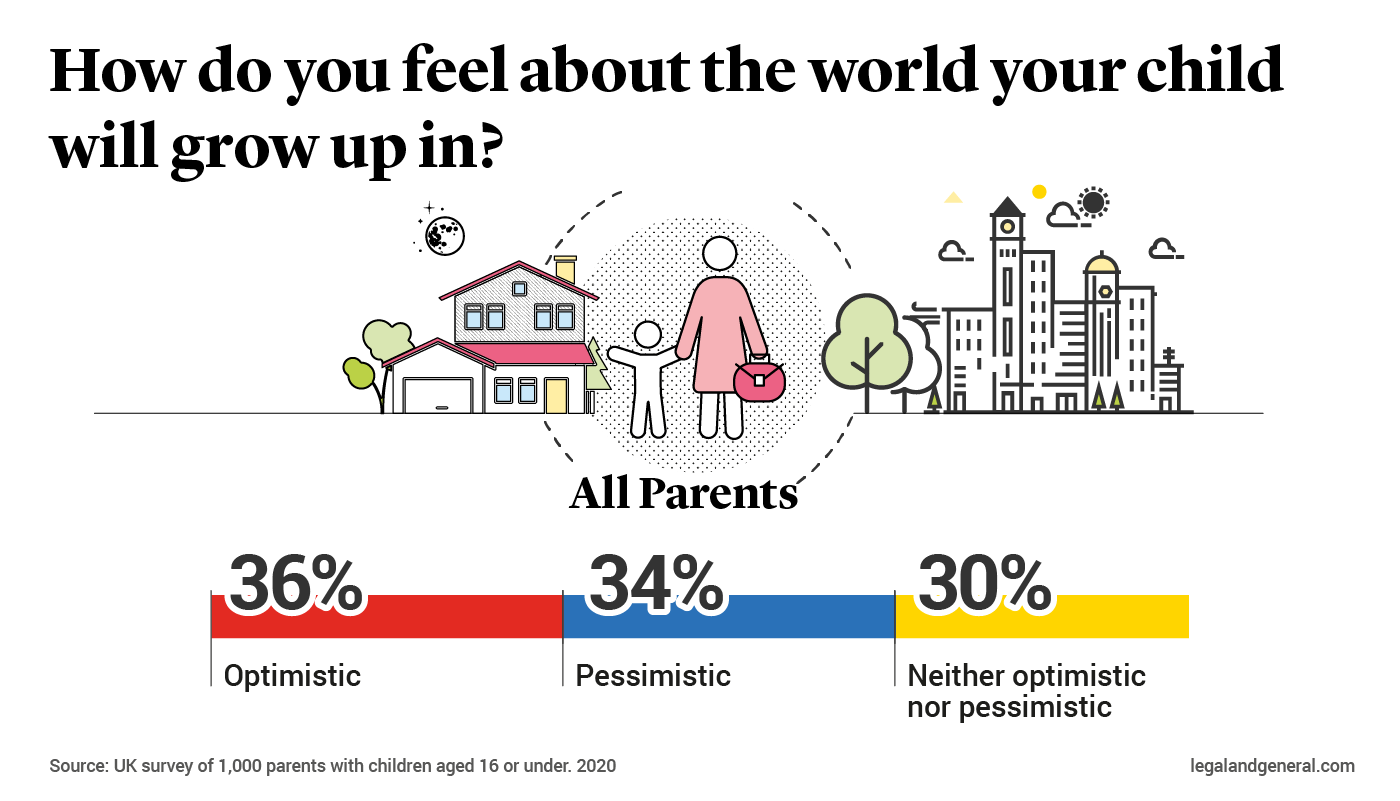 However, the results varied significantly across different groups. 36% of mums said they were pessimistic, compared to 30% who were optimistic. The pessimism rate climbed to 50% among those aged over 55.

What’s more, we found that the experience of single parents in particular was markedly different from other parent types. Not only were single parents the least optimistic (28%), more than 48% said they feel judged either ‘always’ or ‘often’ – the highest rate of any category.

There are more than 1.8 million single parents in the UK, of whom about 90% are women9, so once again we can see that mums face some of the biggest challenges when it comes to raising children and running a household.

In 2020, many parents face difficult trade-offs between putting food on the table and spending time with their children, not to mention running a household and finding time for their partner. Every family is different but, increasingly, many dads want more time at home. Many mums are overburdened with housework and single parents in particular – among whom women are overrepresented – often feel judged.

Despite these challenges, parents share a common view about how they’d like things to change. While mums are often the most resistant to shared parental leave, across the board there is optimism that technological change, better childcare and greater rights for all parent types can make life easier for everyone.

And, as we look ahead to a world beyond coronavirus, the stage could be set for technology, new parental laws and changing social attitudes to empower the parents of today to raise the citizens of tomorrow.