“It’s a state of mind,” says the former teacher and youth worker. “It doesn’t have to cost a lot of money – the airfare is the most expensive bit. You can stay in hostels or in people’s homes – that’s an amazing way to meet the local people. Travelling on public transport is the best way to see a country; travelling that way, the local people accept you a lot more easily. If you wander into a village with your backpack, people take you into their homes, you meet their family and learn about their way of life.”

Exploring the world in retirement

June has packed a lot of travel into the decade or so since she retired aged 63. She’s criss-crossed the globe by plane, train and Harley-Davidson motorbike. She’s seen the Great Wall of China, Everest base camp and Cambodia’s Killing Fields. She’s camped on the side of the Grand Canyon, canoed down the Ardèche and slept in a Cambodian treehouse.

June and our Podcast host, Angellica Bell, sit down to discuss traveling in retirement. 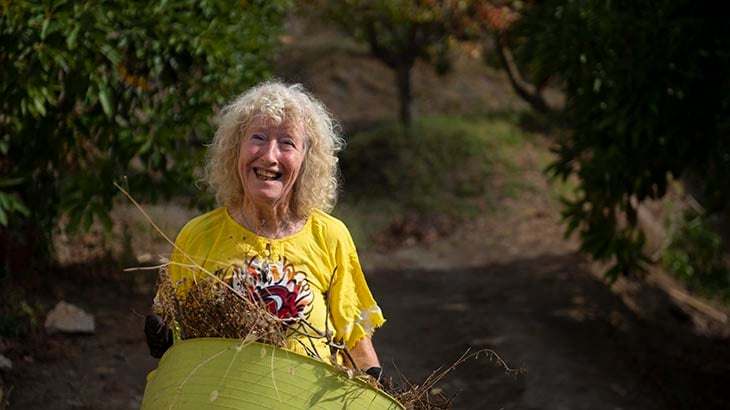 “Travelling is my life,” she says. “I like being on the move!”

And how. She splits her time between a UK narrowboat in the summer, a Spanish avocado farm in the winter, and biking whenever she can. Her passion for travel began decades ago, with an extensive trip through the Far East – she and her partner wanted to travel back all the way overland, but the Afghan winter stopped them. A few years later, they took their two children, aged three and five, on a year’s trip to the Caribbean and South America, journeying through Argentina, Brazil and Peru.

“It’s so exhilarating and you learn a lot – it gave the children a lot of confidence, too,” she says.

Before retiring, she and her husband had bought an avocado farm high in the Spanish mountains between Granada and the coast. The first year after they retired was spent there, planning to farm the land themselves; but sadly, her husband died just a year later.#

“I was determined to keep on the move and do what my husband and I had planned to do together,” she says of that difficult time. Four months’ backpacking round southern India proved inspirational.

“It did me a lot of good – I so enjoyed getting back to backpacking and it got me going again. The following year I went off to Italy with a friend I had worked with; her father had a Harley-Davidson and we went off to a Harley festival in Barcelona, which was amazing.”

June’s energy shines through. “A few years back we went to Romania (they biked there, of course, camping along the way), to stay with a friend who used to work on the farm in Spain. He’d gone back to Romania and we stayed with his family on their small farm.

It was like going back 100 years – we had a wonderful meal cooked over an open fire, we’d helped collect the wood with a horse and a cart. To me that is what travelling is all about, sharing the lives that people live.”

June is the personification of the old adage, that it’s the journey and not the destination that counts. She’s happy to travel with just a carrier bag of possessions – “If I run out of clothes I buy a T-shirt in a local market” – and gets involved wherever she goes. 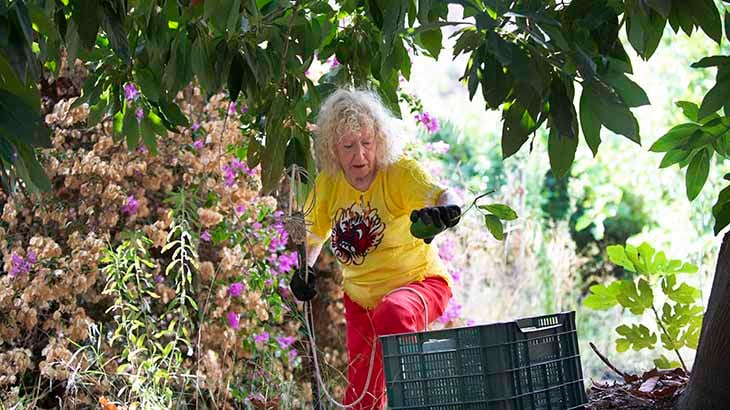 “In Shanghai we got up early and went to the local park to join the tai chi classes. Then we found they went dancing there in the afternoon, so we went along and did that too.”

If you’re feeling inspired to get active after reading this, June’s advice is to go for a walk or a cycle ride. “Exercise is a priority – there’s no choice. If you don’t do it, your body will suffer, and everybody can walk, cycle or swim. People get to 70 and start stiffening up; you need to use all those muscles to support your joints.”

June’s tips to would-be travellers? “You need to do your research, but there are so many books or sites online that tell you where to stay. Then once you’re there, people are so friendly and everyone shares information, you can get a lot from other travellers.”
And her final piece of advice? “Just go. It’s easy – it really is easy!”